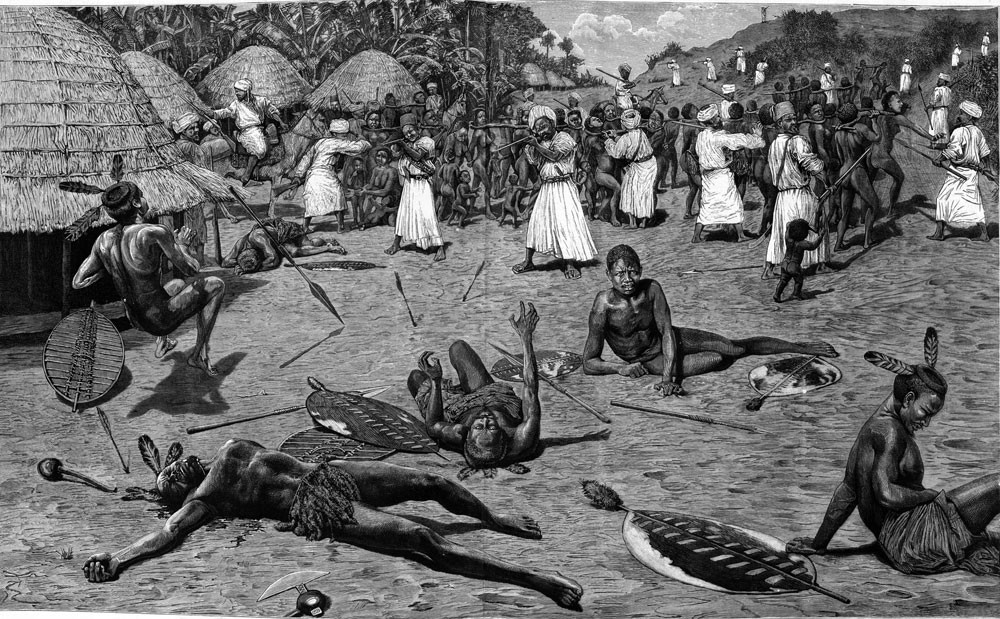 Arabs on the upper half of the drawing. Their dress: headscarves, and long white garments. Limp Black bodies on the lower half. Some lying on the ground. One caught in flight. Flung into the air by a gun blast. Negroes according to their dress: what looks like goatskins. Bird feathers in their hair. Wooden shields and spears on the lower half; long riffles on the upper half. This drawing is technical, casually reductive.

This is an ad. “Save Negroes from the Arabs.” This copywriting is unlike the political paintings of its century. It tries too hard to become political satire. Is this the way a London public consumed images of a negro? Is this a witty remark shared over mid-morning breakfast. There is no real politics here.

By any means this drawing is ahistorical. I mean we couldn’t tell you where the Arabs came from, nor where they are going. There isn’t any future for the Blacks either. Perpetual emptiness.

Keep in mind that this drawing appeared before war photography, in 1888. Yet it embodies all the antics that we have come to associate with war photography. An obsession with bloody bodies; the perpetual shooting; the lack of deliberateness; the scene of violence. The casual violence in this image reminds me of the aphorism that, “Stanley shoots negroes as if they were monkeys!” It could be a scene in which negroes are shot, their village raided. But for whom? Who knew anything at all about the death of negroes in 1888?

As a drawing of war, it is detached from the very Black bodies that are central to its bad humor. Johnston’s superfluous drama in the flight of Black bodies, draws our attention even more intently to the Arabs. It feels odd writing about this image, the press photo of its age, when it reminds me of “Tin Tin in The Congo.”

There’s something inherently caricatural about this image, and how the bodies respond to the bullets: an echo of history. When reading the early colonial narratives, Black bodies always seem to be flying through the air of gunpowder explosions. The battle of Isandlwana. The battle of Omdurman. The Maji Maji rebellion. All of it conveyed with bad humor. Something deeply disgusting about the way this history reflects itself towards the present. The cruel joke of press photography in Southern Sudan, Kivu, Asmara, Mogadishu. How different is the laughability of these photographs from Johnston’s in 1888?

What details about the human condition do we take from this image? There’s no real passion here. What we have is the sentimentality of a witty picture. In its mathematical precision, it excludes the author’s own feeling about the Negro, any sense of seriousness, any sense of real sentiment. Delacroix is consumed by the French soldier’s lives, even in their death. He is absorbed by the weight of things, such that a mere horse becomes a version of the truth.

The truth of this is Johnston in his true colors. His mockery of the Blacks and Arabs, as cardboard stooges, waiting to be destroyed or damned by British imperialism. What seriousness can one gather from such an image? What mirror of history could anyone replicate for the notion that Blacks and Arabs are inferior races?

Culture is an unsettled, modifiable prism. It is this unsettledness that I find difficult to resolve in Johnston’s looking. In his boredom, and monotonous looking, he is incapable of telling us more about the place of slavery; the specific values associated with slaves—with his reported knowledge of African languages, he conveys little meaning here. That boredom is what renders this picture dull, and uninsightful. The lens through which Johnston sees the Negro has a buffet quality.

Regardless the memory of slavery is suppressed in Africa. The terminology used to describe slavery today is not reflected in Africa, Asia, and China, where labor, particularly child labor, continues to thrive without limit. How does one build an imagination on slavery in a country of ex-child soldiers that brought liberation? Unlike the bare-chested venus holding the French liberation flag in Delacroix’s 1830 painting, liberty comes to Uganda on the haunches of a bare-chested child holding, in one arm, an AK 47.

How will I tell my nephews and niece our history with these half-joking pictures? Shall I laugh with them in agreement that Negroes have no sensible precedent for resistance? Shall they, too, chuckle at the bad joke that Arabs ruled us? Won’t I tell my nephews and niece our forefathers’ role in this little known history of slavery, migration, war? The labor from Rwanda herding cattle? What shall I call this labor?

It is almost as if what is rescued from history is a failure to realize Kilwa, Mombasa for what it truly is. Yet their maps show the coast as a center of gravity. Slave routes are directed towards the coast; slave houses in the interior are temporary holdings for slaves, emptied into caravans going to the coast.

What appears on the surface of this image: the Arab guns, the flying carrot-like Black bodies, the domination of an African village. A closer reading reveals the fear that British colonialists had of being overshadowed by Arabs. This fear is masked in the fireworks and explosions in such drawings. This envy is conveyed as some kind of twisted sickening humor.

This drawing, first published in 1888, began Johnston’s two-volume anthropological survey of the Uganda Protectorate, a study with medical anthropology at its heart, with a strong bias against the values of Lugbar, Kakwa, Karimojong. To this day, these societies are the most politically oppressed groups in modern Uganda. He makes a photograph of a raft made of reeds in the West-Nile area; makes an illustration of the Karimojong home with a goat pen and fireplace inside. But his attitude is remarkably positive towards the Bantu. His revelations supported by the study of hundreds of Bantu skulls by a medical doctor in London.

His pages on the Ganda and the Tooro are particularly ornamented; I am surprised by the transcription of Ganda music in a score in this 1902 volume; bookended by the proverbs and tales of the Ganda. Ironically, the Baganda in Johnston’s pictures dress no differently from Arabs. Why did he not investigate the Arabness of the Ganda? It seems as if what is described as civilization in Ganda—as unique from all of East Africa–is tied to slave trade. An unsettling attribute which goes unnoticed in the volume.

I prefer to call Johnston’s volume ornamental as opposed to oriental—its aesthetical economy is dull, monotonous. In a letter, Johnston would confess that he was bored with his work. He was either a victim of the colonial system, or an artist whose work shows that system’s corruption of its own best minds. It seemed he had seen everything there was to see. It seems as if his existential crisis has to do with wanting to enter history. He could enter the annals of history like Charles Darwin and Hanno the Carthaginian engrossed with the African elephant before Christ. His work seems as taken with such historical figures as it seems self-contradictory, boring, or banal.

The taste of violence, here, is connected to the racializing of the negro. Drawing the negro concerns both race and creativity. Race becomes a central conversation in early colonialism, particularly in the methodology employed by Johnston, where his recommendations to the British government, are influenced by his anthropological looking at what he defines as the various races of Africa: some more “advanced” than others, according to his reports. Not ironically, it is this kind of methodology which was employed in the drawing of genocidal episodes in the great lakes. Johnston’s looking is hardly complex: it is a decided positioning of the Arab and Negro race: however, it is in his positioning of the negro as inferior, as a spongy, and rather lifeless body, that Johnston’s imagination on the negro verges on bad humor.

A small crowd waits, standing or sitting, bending or kneeling, reclining or at attention. Some have turned to stare. Some are…

I begin with facts available in the public record. Sometime in mid-May 1899, the Benin warrior known as General…