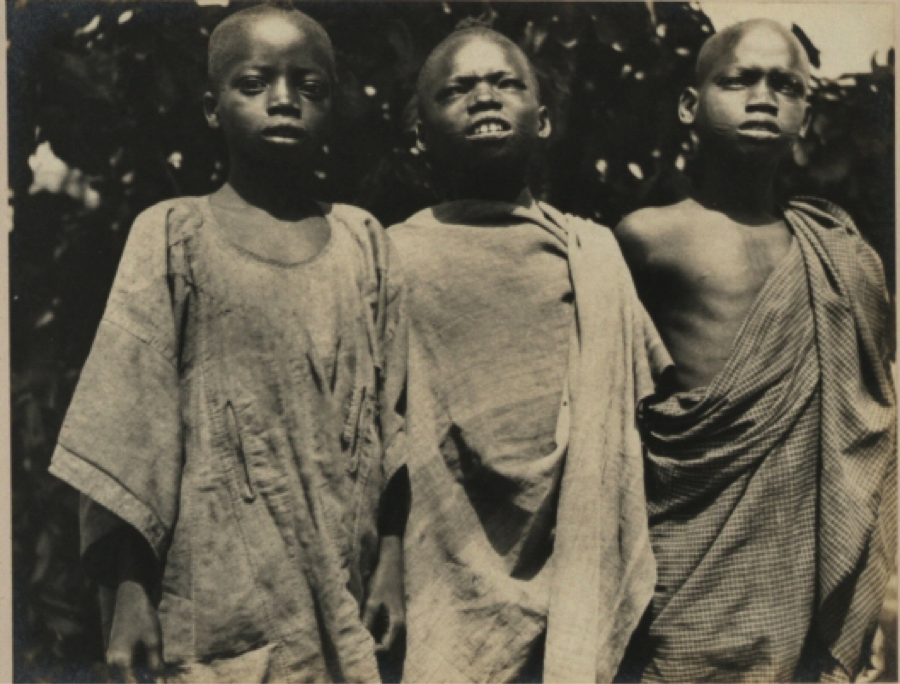 Three boys are standing in the sun. Their foreheads, glass-like, reflect flashes of light. Shadows fall across their necks, reaching their shoulder blades. After days of repeated looking, I discover what should have been apparent immediately. In the photograph, only the boy who turns towards me isn’t squinting. There are two positions for a subjects’ eye. Looking above, towards the sun, and directly, towards the viewer. Above, they divert attention. Directly, without squinting, they invite scrutiny.

I consider their eyes.

I consider their eyes, and that forms the basis of my response in writing, almost a hundred years after the picture was taken.

photographs spanning 100 years of African history from the 1860s onwards. These images were uploaded online on Flickr, as part of the Africa Through a Lens Project, where viewers are invited to add tags or comments to them. In this digital archive, there are almost 1,000 colonial-era Nigerian photographs, including those of Kamberi people.

Is it a repository of violent, condescending observations? It is, if you consider the entire framework in which the photographs were expected to operate. Before the photograph was taken, the boys were colonial subjects, prejudged and subdued. The camera was used to prove that.

I seek to situate myself in that history when I look at the photographs a century later. To situate myself, I deal contemporaneously with the archive, and treat history with conceit and imagination. My prejudice is to reflect on images of a colonial past and how they foretold this moment when the task of decolonization isn’t quite done.

I take particular interest in the boy on the left, who is looking back. Two things are striking about his face: his open lips, and his face without creases, entirely serene. He looked towards the photographer as if uncertainly, with innocence.

One problem with looking at an eye in a picture is its inability to return this gaze. When I say the boy in the photograph is looking back, I must come to terms with the improbability of my declaration. His eye is unblinking, held inanimately in the same position, and atemporal. But I blink. I am temporal. Yet I invent a face-toface encounter with the subject: I want the Kamberi boy to look back at me. When he does, we become familial—since his past, as a colonial subject, is inevitably mine, citizen of a postcolonial nation.

The history of the Kamberi people is instructive, and Frank A. Salamone’s book The Hausa of Nigeria transmits some of it. A people of Yauri-land in the old Sokoto Caliphate of northwestern Nigeria, they put up resistance against the Hausa, the Fulani, and the British. A pivotal part of that resistance by the Kamberi and the neighboring Dukawa people, Salamone wrote, was the preservation of religious practices in the face of pressure to convert to Islam. At the onset of attacks by Hausa, Fulani, and other Islamic forces in the 19th Century, they were more prone to attack than their Dukawa neighbors since they lived in frontier settlements. They lost the capacity to respond militarily, fled their cities, and sought refuge in marginal bush areas of Yauri-land.

In the 1900s, when the photograph of the boys was taken, the Dukawa allied with the Kamberi to militarily resist British tax collectors. But joint armed resistance proved ineffective against British power. According to Salamone, the Kamberi, in order to survive, were forced to adopt an accommodating posture of apparent docility.

Apparent docility is a visual reference, and recalls the serenity of the boy in the photograph. He had to be seen as docile, to be complicit with forced docility. The photograph of the boys thereby gains its peculiarity as an image in which the question of identity is posed.

I imagine that the boys, while being photographed, contemplated the unfamiliar camera. How did they consider the equipment? As a box-like mirror whose meaning and use eluded them?

My relationship with their image cannot escape the possibility that they didn’t see it, or the fact that I project my biases toward their faces, unaware of their thoughts. Yet I must surpass those limitations. The ultimate aim of considering their image is to establish kinship. In looking at them, declaring that I am their progeny, I affirm our shared struggle to repossess our identity from the violence of colonialism.

With the knowledge of a shared struggle I return to the image to imagine my forebears protecting themselves from insidiousness. Or, no: I imagine them realizing the insidiousness and agreeing to be complicit with it. Complicity, though inferring illicit collaboration, is justifiable when it is a kind of compromise. It is a form of audacity to stand before a colonial photographer, accept to be seen as docile, and yet maintain your idiosyncrasy.

In my gaze, and in his gazing back, the boy on the left is no longer a colonial subject. I see him pose self-assuredly, with the gravitas of a person capable of expressing identity.

Looking at images in an archive is never complete as an isolated, individual act. Archives are made available in a public location, physical or virtual, and as a result accessible to collaborative thinking. In late 2012 a group of African writers, critics, and photographers collectively considered the collection of images of African history in the digitized UK colonial archive.

No member of the group is named in the Tumblr blog set up for the purpose. The collaborative endeavor ended after a few months. There are now four webpages of text and image. The texts are responses by group members to an image. Each text is unsigned (an initial appears once), as if in solidarity with the anonymity of the faces in the archive.

One begins to understand that the images in the archive are timeless. With ageless anonymous faces, they kick back against any “today.” With their permutations of meanings and significance they seek to live forever.

Working from Kenya, Australia, Nigeria, Uganda, and the United States, how did the collaboration end quickly? The writers and critics did not run out of words. How could they? Did words, however, become superfluous, bending over the images like water navigating rock?

Language is always superfluous in relation to images.

Yet it is through superfluity we gain access to images in the colonial archive, now and always. Today, the language of collective thinking about the past could be provisional, lacking the condescending specificity at the heart of photographs in the colonial archive. A provisional response, which suggests the possibility of revisions, of repeatedly making room for clarity, is in my mind an empathetic stance in relation to images. This is something writing makes possible. Texts, unlike the colonial photographs, do not serve as evidence. What they lack in finality they gain in nuance. By probing.

The Khanga is Present

Memories of my grandmother come to me in many forms. One that stands out is a ritual of…