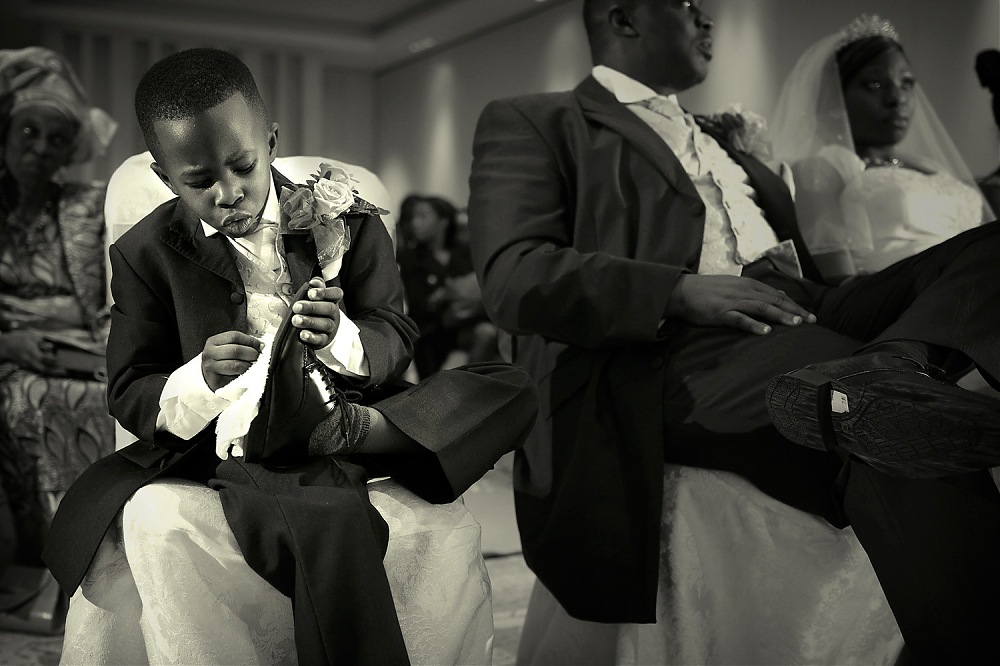 Boys always want new shoes. If the shoes are worn for the first time at a long awaited event, like a wedding, it becomes even more pleasurable. The shoes, on that occasion, are both fashion accessories and an occurrence. The boy knows there will never be another time when his shoes are new for the first time. He also knows that—whether he actually realizes this or eventually comes to realize it is inconsequential—the newness of the shoe is fleeting, subject to transience, inevitable like gravity.

To be a little boy with new shoes, no one teaches anybody that. My favorite moccasin shoes as a boy were brown. They were given to me for a wedding in the family. They were tight fitting, but they looked good. I wore them wincing, while happy. I hoped to wear them all my life. Years later, when I was a little older, I saw the shoes again, now useless. Looking, I was awash in nostalgia. The only use the shoe could have was memorabilia. Its fate was the moment my mother would hand it out to another little boy, or walk haltingly with it towards the dustbin.

In the photograph by Jide Alakija of a boy wiping the sole of his new shoes, from the series “Page Boys,” all that seems to matter is how he holds up his left leg. Yet that’s partly true. His left leg is simultaneously significant as the fingers of both hands, forming a grasp around the tip of his shoe, tightening its grip on a white rag. He is poised in a little sway. His hands, his legs, and his shoe are put at the service of his pouted lips. In service: I assume that those lips whisper to his hands, as those hands scrub away dirt. Which dirt? A clue lies in the other shoe in the photograph, worn by the groom. This second shoe, as the first, is new. It is new, particularly, considering the label left on its sole. The boy is uncomfortable with the label on his shoe. My deduction is informed by the intensity of his gestures, his delicate yet self-assured hands.

Those traveling, footling, or walking through life, are in need of solidity. With this understanding people sometimes use the words “sure-footed.” In cases like Jonathan’s, when shoes enter political register, however, there is a fork in the anecdotal road. In the estimation of some Nigerians, the shoeless little boy detours as the clueless president. If the joke succeeds, the legacy of Goodluck Jonathan would rest on the words “I had no shoes.” Only that it won’t be funny. “Shoeless” does become clueless.” And clueless, well, becomes a word for the permanent blight on the political class that orchestrated Jonathan’s ascent to power.

In the way that wearing shoes suggest, as in the boy’s face, a sureness of purpose, they also ready the feet for journeying. “A Long Wait.” Emeka Okereke’s photograph of a lone figure in a Paris subway is used on the cover of Ebi Atawodi’s book. Overhead, a signpost reads “Lagos.” There are immediate resonances for the image—“Afro-futurism,” for instance. If Lagos aspires to become Paris, if Lagos is the sister megacity of Paris, there’s the tunnel in the photograph to contend with. This seemingly interminable tunnel, with only blotches of light in the distance, makes that Afro-futuristic optimism, at best, misplaced. At worst, deluded. 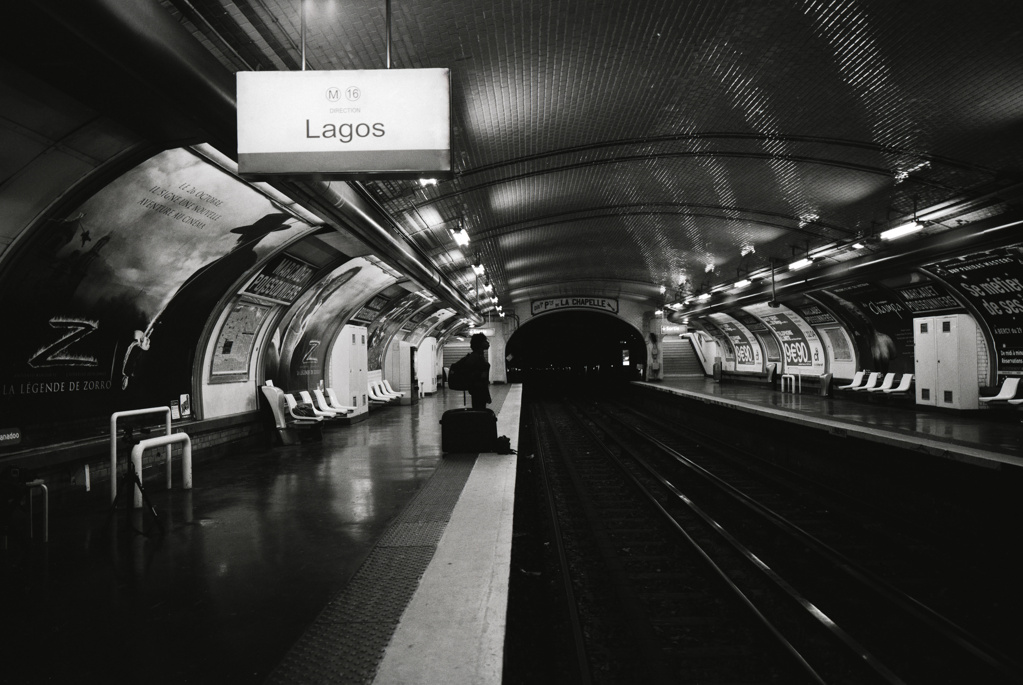 Hope is not merely optimism. It is something akin to waiting for a train that might never arrive. What makes Okereke’s photograph truly futuristic is the silhouetted figure of a ready traveler. A silhouette, in a monochromatic photograph, allows for general assumptions about human physique. In “A Long Wait,” the body is poised for a wait, however long it takes for the train to arrive. Through this poise one can contemplate the future. Through this poise, also, the wait is interminable yet short. The sense of the future is conveyed in the language of paradox: in the manner of a thief in the night, or an honest president after years of contemptible ones.

In “Final Notations” by Adrienne Rich, I read:

it will be short, it will not be simple…

“…twin kernels separated by a thin all in a palm-nut shell.”

I could relay my thinking about Uche Okpa-Iroha’s photograph, from the series “Underbridge Life,” through metaphors. I could write something like, “The photograph bears witness to shadows.” That might end up trite. On the other hand, it could be as though I have found words to evoke the sense of a life lived in relative obscurity.

I’ll write, then, of the image primarily in the sense of its evocations… 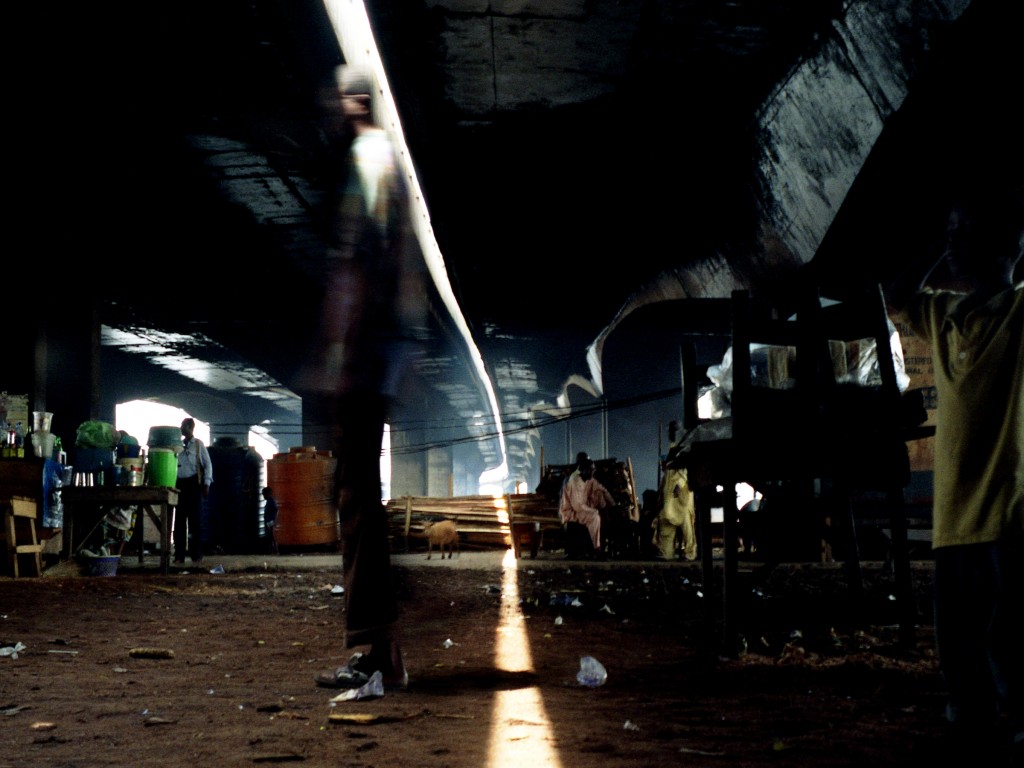 The tunnel, the under-bridge: underbellies of a city. Where, despite human presence, it is hard to miss the darkness and lowliness. If anyone takes residence here, it is as the worm of the earth. Yet, who’s in charge of these definitions? Who puts “under” before “bridge?” “Sub” before “city?” “Lesser” before “known?” The government or urban planners or sociologists facing a crisis of categories or everyone who’s known the feeling of being underneath?

Obi Okonkwo is Chinua Achebe’s protagonist in No Longer At Ease. Once, driving from Lagos Mainland to Ikoyi, the former occupied by the nouveau riche, the latter by the impoverished, Obi is struck by the two cities in one: “It always reminded him of twin kernels separated by a thin wall in a palm-nut shell. Sometimes one kernel was shiny black and alive, the other powdery white and dead.”

Light in the photograph is the thin wall in the palm-nut shell. To respond hopefully, I would imagine the under-bridge as the kernel that is shiny black and alive. For there is, indeed, liveliness under the bridge, lives in full. A row of flasks for food. A stack of planks for sale. Men in conversation…

Okpa-Iroha’s photograph is a meditation on the dark and lowly. Yet in it a blurry figure is touched by serpentine light. Light snakes its way through the depths of the photo’s frame. Light falls from above, from the parallel, over-ground city.

“Because we go and beauty stays.”

A consummate portraitist, T.Y. Bello’s photographs have outlined the features of Nigerian faces, famous, near famous, and non-famous. Mama Ekundayo, in 2003, is 86 when her portrait is taken. She is photographed from the side, in a green scarf and matching bùbá, with a love-shaped earring. In her life, Bello recounts, Mama has taken care of hundreds of children. Doing that with little means. 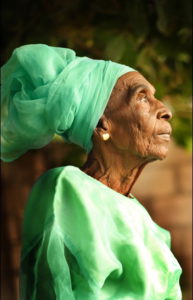 Is love durational? Does age get the final say on how love, much like beauty, is measured? On the last page of Joseph Brodsky’s Watermark, I read, “Because we go and beauty stays.”

The first part of this essay was published in the August 2016 issue of The Trans-African.

1. On my first trip to Dar es Salaam I walked around the city on foot and got sunburned so badly…

The Image of Life and Death

I met my paternal great-grandfather for the first time in a photograph taken during his funeral. My father, then a…