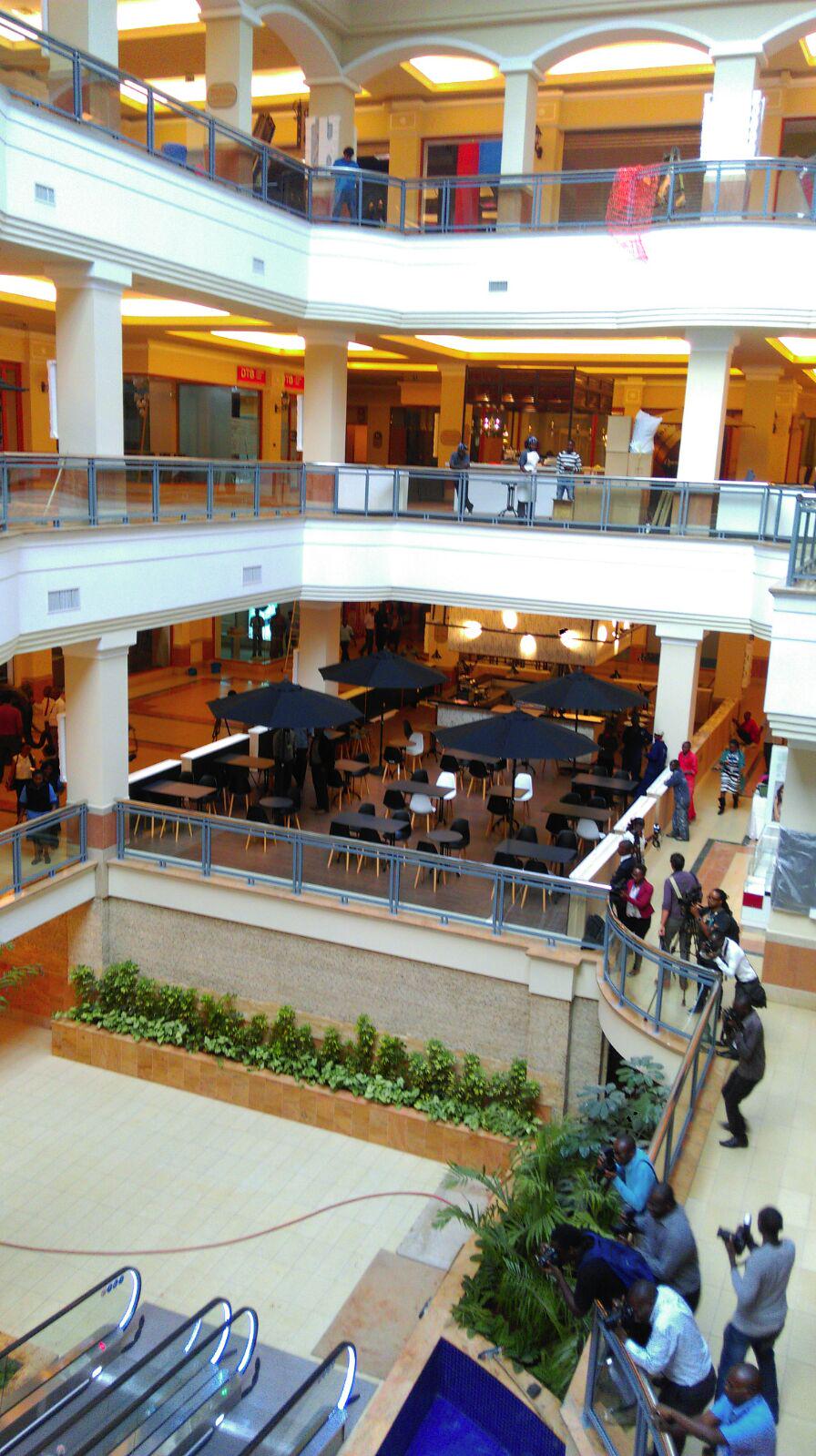 On the days and months following that Saturday afternoon in September 2013, the images of Nairobi’s Westgate Mall attack posted on the internet were devastating. I remember two photographs. In the first photograph is the body of a man at the
entrance of the mall, a map of the last moments before his death outlined next to him with bloodstains. It was clear that his death was painful, that he had stayed at the edge of death for a while.

There is also the image of two children standing outside the mall next to the body of another man. They are watching the entrance, waiting for a mother, a father, a sister, a friend: someone who might never return. I have thought about these two children. I have wondered if they ever reunited with the person they were waiting
for. In these two photographs is the horror of an afternoon.

But there are new images of Westgate Mall. Most of them accompany the reporting of the mall’s re-launch. When one looks at these new images, it is hard to tell what really happened here. The horrors of that Saturday afternoon and the death of over 67 people disappear. The bullet-riddled face of Westgate Mall is no longer there. The memory of blood, the sounds of guns, the smoke, the screams and the dust is replaced by sleek walls with posters of perfume shops, the shadows of mannequins and sale signs inviting shoppers for discounted purchases.

To one who does not know, these images say nothing of what happened here. To the ones who know, the images preserve nothing. They say nothing of the questions that still remain unanswered.

On returning to Westgate Mall recently, I was reminded of the opening scene in Claude Lanzmann’s Shoah, which, through witness accounts, mourns the Jews murdered in Chelmo. In this scene, a returning survivor, Simon Srebnik remembers Chelmo as a place of horrors that like Westgate, has moved on.

“It is hard to recognize, but it was here. They burned people here.
A lot of people were burned here. Yes, this is the place. No one left
here again.”

Often when I think of this scene, I am struck by the insistence of here, this place of horrors. Here. It is here. Simon Srebnik does not want this place to be forgotten. He does not want to forget it either. He insists on this place right here.

Looking at these new images that accompany articles on the re-launch of the mall, I am appalled by the spotlessness. I crave for the stains of death, a hint of these horrors. I want to stay here with these old images, haunted by the ruins. But I am reminded that the memory of man and woman is short. I am also reminded that the things of men and women move on, in the same way grass grows over the parks where great tragedies happened. It is on forgetting that this city is built. This forgetfulness is collected, and as with the things that die in the sea, something new is made. Out of this death, something else is made. Underneath this city is the memory of another city. I am reminded of Teju Cole’s protagonist, Julius, who sees the city as a site written, erased and rewritten.

Perhaps it is better to rewrite places. To let these sites of horror vanish. Why should they be allowed to continue standing in the glory of their destruction? Why should they be allowed to continue tormenting us? Should we not forget and move on? Why must we insist on this deathly past? In the absence of images and the
disappearance of sites of memory, such horrors like the Wagalla massacre in North Eastern Kenya where over 5000 Somalis were rounded up and killed remain bearable. Perhaps it is easier for a nation to mourn in the absence of images that haunt us, images that remind us of the horrific things we are to each other.

Even as I find a strange comfort in these old images of Westgate Mall that reaffirm the memory of the dead and the grief of those left to mourn, and as I crave for the preservation of the sites of horrors, there are two things I am aware of. I know that preservation of public memory is deeper and more complex than an image of two
children standing outside Westgate Mall, waiting for someone who might never return. I am also playing around with the idea that the world is a ruin, that underneath each place we stand are unimaginable horrors that we do not know of.

In a city like Nairobi for example, there are layers of horrors that I might never know of. On each turning is something that has been forgotten. A corner in an alley becomes a scene of murder in the morning and then a hawker’s stall once the body is moved. Who remembers what used to happen in Nyayo House? How did
Daniel Arap Moi’s torture chambers look like? And like these buildings, we are reminded that we too are forgettable. That everyone is disposable, that even buildings that remind us of the horrors we have become to each other will be silenced with all their accompanying histories. They shall be rebuilt. And so this city remains a text through which we read our own acts of forgetting and
misremembering. The horrific history of Kenya piles and piles, and then a country hardened by silence is formed; a country that knows how to survive by looking away.

As I think of this, I am also reminded of Sebald’s words, who, on the erasure of Germany’s war time ruin writes:
“…reconstruction of the country after the devastation wrought by
Germany’s wartime enemies, a reconstruction tantamount to a
second liquidation in successive phases of the nation’s own past
history, prohibited any look backward. It did so through the sheer
amount of labor required and the creation of a new, faceless reality, pointing the population exclusively towards the future and enjoining on it silence about the past.”

*
In the speeches given during the re-launch of the Westgate Mall, the recurring message is to show “them” that we are undefeated, to recreate the glory of Westgate. The news clips accompanying these new images of Westgate retell the installation of x-ray machines, explosive detectors and bullet-proof guard towers. We are also reminded that an Israeli firm, I.R.G, will be in charge of the mall’s
security. These news clips echo the message of these images. They ask those who might be worried to stop worrying, to look at the sleekness of this mall. The walls are clean, untainted. The coffee shops are where you want to sit with friends and
wait out the Nairobi traffic. In one of these images, a banner is hung on one of the walls, reminding shoppers that Kenya is a peaceful country.

In his speech during the re-launch, Nairobi’s current governor, Evans Kidero, reassures Kenyans of the safety of Westgate Mall, calling the reopening a
“demonstration of the determination and the positiveness and the resilience and the indomitable spirit of the Kenyan people”—a mouthful indeed. He adds that “as a nation, we cried, we mourned, but Westgate is back.”

During the same re-launch, the Inspector General of Police, Joseph Boinnet says that “we will fight back. We will lead normal lives. Whatever they do, we fight back and we are resilient.” On Twitter, Boinnet calls the mall Kenya’s “new symbol of courage and resilience; strength and fortitude.”

Unlike other places, the act of forgetting in Westgate Mall is accompanied by repainted walls and ribbon-cutting ceremonies. There are no ribbons for Garissa University in North Eastern Kenya. As for Moi International Sports Centre, we bury the shame of our hostility towards Somalis by rebranding the stadium to the “Home of Heroes.” Kasarani, this place where more than 1000 Somalis were locked up incommunicado after an anti-terrorist operation in Nairobi’s Eastleigh.

There is less burden in this looking away, in these new images of Westgate Mall. When we do not see, we are no longer haunted by the memory of those who died there. And so we rebuild, we rename. It is also true that those who have survived these horrors might never want to return, even by seeing, to the place of their own suffering. Those to whom such ruins are a place of trauma. But I am having difficulty putting these new images in the place of the old ones. And so I ask if to refuse to let go of these horrific images is to concede defeat. It might be that I crave for the spectacle of the horrific.

A friend asks me where I want this image of unforgetting to exist. “Certainly not in Westgate Mall.” I do not know. I am only haunted by this rebuilding that buries the memory of the dead underneath stone.

This Image of Bi Kidude

A small crowd waits, standing or sitting, bending or kneeling, reclining or at attention. Some have turned to stare. Some are…