A city adopts a certain shape, an arrangement that can be seen even in its absence. Somewhere in my childhood, there is an image of
Nairobi, one that I saw whenever I closed my eyes and imagined the city before I immersed myself into it. At the centre of this image was the strident and imposing Kenyatta International Convention Centre (KICC). Other buildings around it faded in background, standing only in waning complementarity.

This image was embedded in me by the first photographs of the city I encountered on my father’s calendars. In these images, the city was as a concrete garden of large and stately skyscrapers, devoid of people, of smell, of sounds, of desires. And so to meet the city for the first time was to meet the buildings that informed this shape.

To meet the city for the first time was to be photographed next to these buildings. What brings to mind this first encounter of the city as a photograph and the city as a building is an image by Kennedy Mungai appearing in an exhibition by Goethe Institute titled “Piga Picha,” which translates to “take my picture.” In this exhibition,
we see a collection of images taken in the 60s through the 90s, most of them from personal archives and others from uncollected copies by studio photographers and street photographers across the city. In looking at these images, we are reminded of a time when a photo was an event, before everyone could take a picture, before everyone had a camera on their phone, before the decline in studio photography.

The image by Kennedy Mungai, which interests me the most in this collection, is one of the altered and often laughable photomontages largely reproduced by Nairobi’s street photographers. Using the city as a background, the photographer places the subject against a building like KICC, and so the subject appears to be suspended somewhere on top or at the edge of the building.

There are varied ways in which most Kenyans consume this image. Often on my twitter timeline, I encounter it as a meme. On a blogpost, a variation of this image is listed under the 12 reasons the current governor of Nairobi, Evans Kidero, has failed at his job. He still lets people take such photographs on top of KICC.

And then elsewhere: “The ultimate measure of ushamba is having a photo of yourself taken ‘on top’ of KICC. {…} guys from upcountry consider this as ultimate proof that you have visited Nairobi. Those who are lucky to finally settle in Nairobi try so hard to hide that past in order to avoid ridicule.” 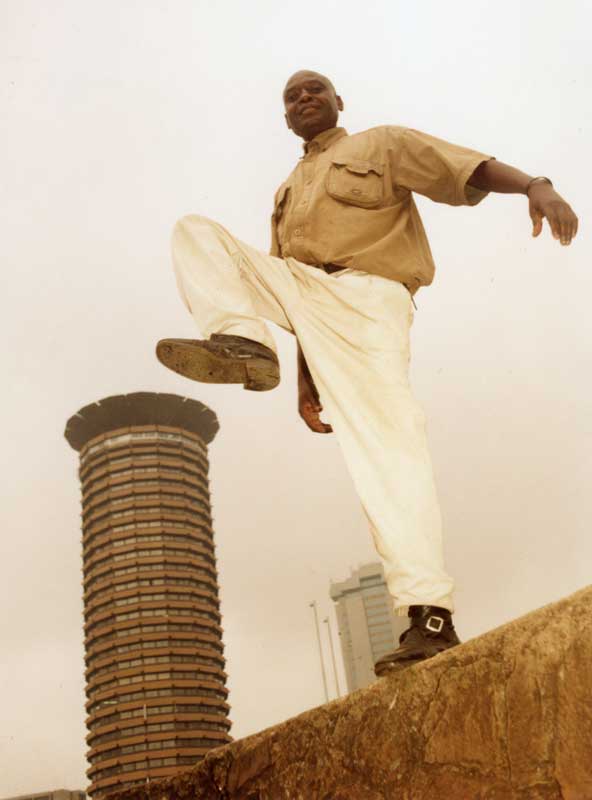 But this image also belongs to the now.

To those who are still surprised by the city, those who visit for the first time, the ones seen as washamba, those who “do not belong here” even as they live and continue to live here, those who are at the peripheries of Nairobi as a physicality and Nairobi as a social—these photographs are a way of being here. A walk down City Hall way in Nairobi on a Sunday is testament of this. These photographs are printed, kept as a record of a day spent in the city, perhaps an unfamiliar space; an evidence of comings and goings. And to those who take this photograph, there is no laughter or shame in this. They are recording first encounters with the city, continued encounters and private moments of loving placed against the background of the city’s architecture.

To those who lay a certain claim to the city, it seems to be a pastiche of images taken in the past before they claimed the city as they do now. They laugh at it, at themselves, at those who still take images with the same aesthetic. As they laugh, they may take this image now as a mockery of past photos, of a time they once existed before the city changed them. Right now, the city no longer surprises them.

There are other questions about the way these photomontages are consumed. For instance, why are those who laugh at these images no longer surprised by the city as they once were? What does it mean to inhabit the city? To whom does this city belong? Who sits inside and who sits at the peripheries? Who is allowed to laugh at this image? Who still inhabits this image as a present?

In attempting to interrogate these questions, I return to my memories of the city as it was first presented to me—a concrete garden of buildings and monuments. There is something to the landscape in the background of these images.

A matter for consideration in this is how between the 60s and the 80s, the state attempted to articulate a national architecture. Buildings like KICC and the parliament not only became a central feature of urban topography but they also shaped how the city is consumed and articulated even now. One then wonders what it must mean to shape the images of a city with a symbol like KICC that is
sanctioned by the state. What happens when state sanctioned buildings become urban icons?

KICC was one of such self-congratulatory projects, commissioned by Jomo Kenyatta in 1967 as the luxury headquarters for the ruling party, K.A.N.U. The building was designed by a Norwegian architect Karl Henrik, who was sent to Kenya as part of a Norwegian aid package. This use of a Norwegian architect is an interesting contradiction to note, especially for a time that was so committed to
expressing the confidence of post-independence Kenya. After Jomo Kenyatta’s death, the second president Daniel Arap Moi continues this aesthetic by etching his philosophy of Nyayoism on Nairobi’s landscape.

These symbols of power, this landscape, then become the city.

The symbols invaded us, they made themselves present in our private moments of memory making of the city, in photographs of families at Uhuru Park, corresponding to the repressive rule of those times.

These icons of Kenyatta and Moi might never be completely erased. They stay in our memory-making of the city. How then is one who grew up in this era, one who wishes to reclaim the landscape of the city not to laugh at the altered image of KICC? What does it mean for this person to take a photo besides KICC now and laugh at it? And to whom does the city belong to now? And by standing next to these icons, is this person intentionally inviting these monuments into their private moments, perhaps because this is the only way they know the city?

We are no longer surprised by these images. We are making a new landscape of the city that includes us. To sit suspended on the edge of KICC in a photo-shopped image is to destroy the nationalistic image. In allowing the street photographer to alter an image and put KICC in our hands or under our feet, we are saying that we
are here, that this city belongs to us too. We document these moments of our presence in this city. We lay claim to the city and to a photograph as an object. In facing the photographer’s lens and in placing ourselves in the frame with KICC, we become part of a new photographic landscape of the city, not to endorse these
monuments of power or to take pride in the icon of a city that once marginalized us, but to reclaim it.It is KANU’s exit from the seat of power that seems to have provoked questions about the presence, or the possibility of a national architecture. This exit began a certain re-definition of the skyline, and by this, the iconography of Nairobi.

Today, members of Kenya’s Instagram community will often meet at the helipad on top of KICC on weekends and evenings. From here, they redirect their cameras in an attempt to reshape the image of the city. In this new image of the city taken from above, buildings appear only as rooftops. The imperious presence of such buildings like the parliament is diminished, and the streets come to life with colours, cars, and people.

The city is no longer just a building.

I begin with facts available in the public record. Sometime in mid-May 1899, the Benin warrior known as General…

The Khanga is Present

Memories of my grandmother come to me in many forms. One that stands out is a ritual of…