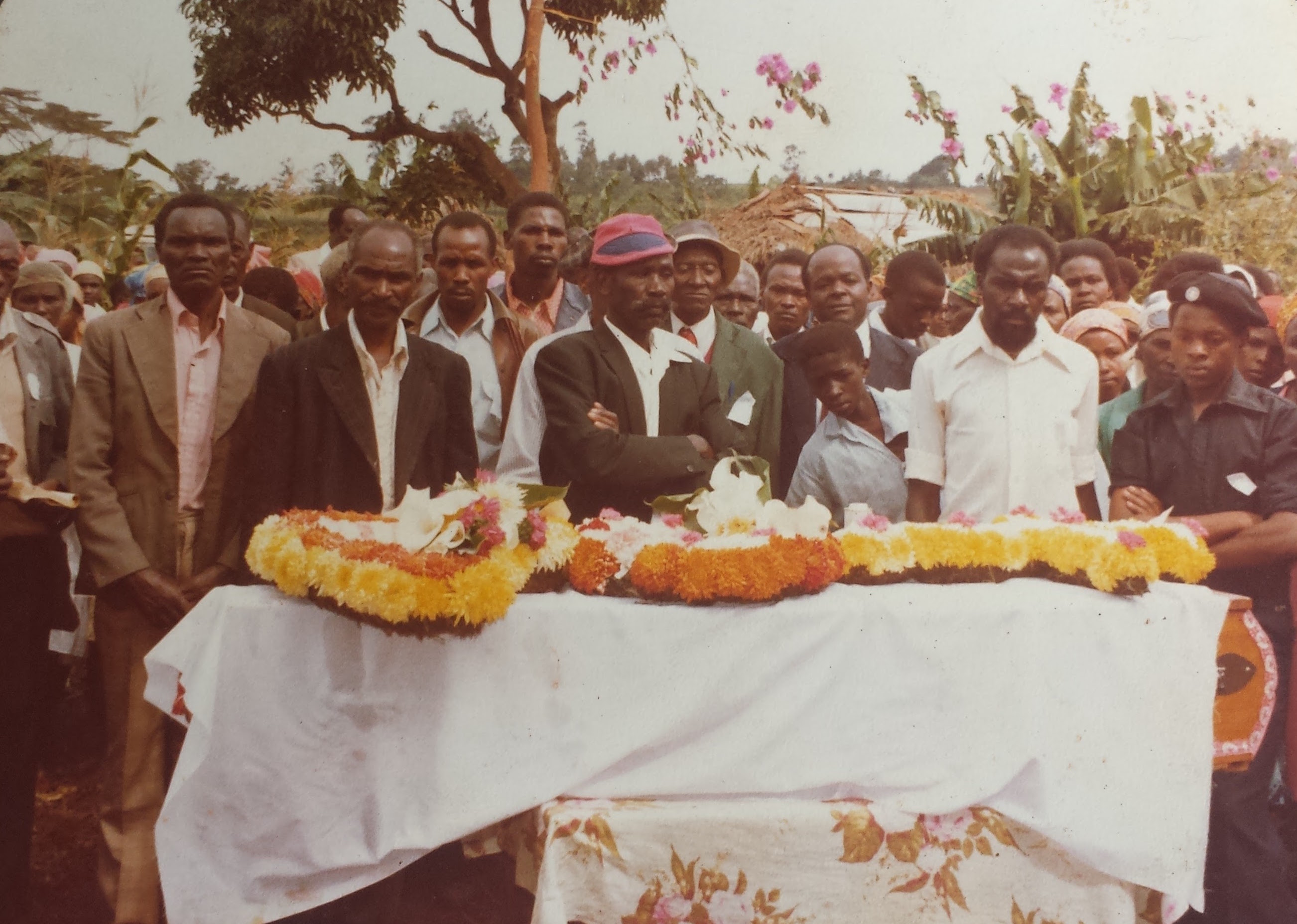 I met my paternal great-grandfather for the first time in a photograph taken during his funeral. My father, then a teenager, all his siblings, and everyone else who mattered, who was family, were huddled around the small wooden coffin. On top of it were a posy of flowers and a can of air freshener. (After many deaths and many funerals, I learnt that the freshener is used to keep away the scent of the dead. As a child, I had thought that it kept the posy of flowers from withering.)

From looking at this image, though I knew nothing of my great-grandfather, I had the impression of a man who was loved, feared and equally respected.

This is how I met many relatives who have been there before me. For each funeral, a new album is purchased and filled with photographs of grieving friends and relatives. The horrors of death must exist alone, by themselves, and so these photos do not mix with the other family portraits. As I’ve gotten older, these albums accumulate in my father’s drawer, reminding me of the passage of time, and of the immortality of life.

I have known these photographs to be those that memorialise our dead. They capture the last moments the dead will be here with us, in their lifelessness before they return to dust. They are testaments of a life that was once lived and loved.

Marion Peck in “Remembering Death” writes of these photographs as ghosts, as shadows of those who continue to live:

“They are the shadows of people who once lived actively and
breathed in a present moment, who saw the blue sky above their
heads and might have felt the same passions, joys, and sorrows in
their hearts that we feel in our own. If we can quiet ourselves
enough to spend some time with these ghosts, contemplating,
listening to them, we may learn from their great wisdom. It is the
wisdom of the ancestors, of those who came before. What we are,
so once were they. What they are, so we shall be.”

Often, I have thought that if one laid out the albums of my family’s deaths and arranged them in some kind of order, they would notice a pattern, this little dance between life and death. The one who stands in front of the coffin, photographed with it in one album occupies the coffin in another album. The one who is in the coffin has, one time or another, stood and been photographed with the earlier dead. In turns, we bear witness to each other’s departure. And as the albums accumulate, death continues to thin the funeral photograph. The cousins, who always stand together become less and less. Parents disappear, replaced by a generation that did not exist in the earlier photographs. Still, some remain in all the albums because that is the way of death. It thins in no particular order.

This way, the funeral photograph somehow reminds us that we too shall go this way. Here, the Latin expression, “memento mori,” comes to mind. Remember death. You too, shall die. It is as if by standing right next to the coffin and having our photo taken, we are all participating in this little dance between life and death. One moment you are in front of the curtain, the other moment the curtain falls on you. You are there in the photo—somehow— but you are no longer there. You are lifeless and boxed.

I am obsessed with photographs of my late mother. Often, I return to her funeral photographs, trying to conjure memories of her. But one thing that strikes me about the photographs, hers and of others dead before and after her, is the absence of death and the dead in the photo. Not in the biological or the physical sense, but in how the dead are no longer the subjects of these photos, even though the photo is supposed to be about them. The dead are there in their lifelessness, but the photograph is overwhelmed by the faces of those who stand next to the dead. It is their faces I look at.

The funeral photograph says nothing about the dead. It says more about the living. I know nothing of those I have met through their funeral photographs, except perhaps their year of death, and that they have relatives and that they must have been loved. I continue to play around with the idea of death and mourning being only about the living, and never about the dead. I think the same of funeral
photography. I remember once, when I was old enough to recognise grief and performance, seeing a relative weep loudly the moment the photographer lifted his camera and pointed it at her. In this case, are we capturing the grief of that moment? And for what purpose? Perhaps because life quickly moves on after the dead have been buried. Somehow, there is that need to remember a grief that,
even when gone, was once here.

There is also something to say about who is allowed to be photographed with the dead, who is allowed to stand next to the casket. For my extended family, and as far as memory allows me, this is a familial affair. But there are other relationships that must be respected. I remember funerals in my hometown Kangundo, where the village chief or a government official present at the funeral had to be photographed before anyone else, even though most of the time, they knew nothing about the dead.

Of what purpose is this to the government? I have often wondered if there is some acknowledgment in being photographed with the dead, just as it is with wedding photographs. The government, parents, children if any, siblings, in-laws, neighbours, the church—the order in which they matter to the dead. I have heard, through gossip, of cases where family feuds arise because a name was missing in the photography list.

I also want to think of this moment of photographing that, in most cases when I am at a funeral, has been a much-needed punctuation to the pain that comes with a funeral day. For a moment, we fool ourselves. Death stops being horrifying, and we stand next to a coffin the same way one would stand next to a friend. Consider Victorian post-mortem photography where the dead are dressed up and photographed as if they were alive. For a minute, we get to pretend that this is only another family portrait.

Perhaps, funeral photography is a way of softening the finality of death; to make it bearable in the same way the posy of flowers and the air freshener on top of the casket do.

Some Nigerians Behind the Lens (II)

"I had no shoes..." Boys always want new shoes. If the shoes are worn for the first time at a…

The Portraits of Men

In the short story The Man by E.B Dongala, “the man” breaks into the president’s palace and kills him. It…