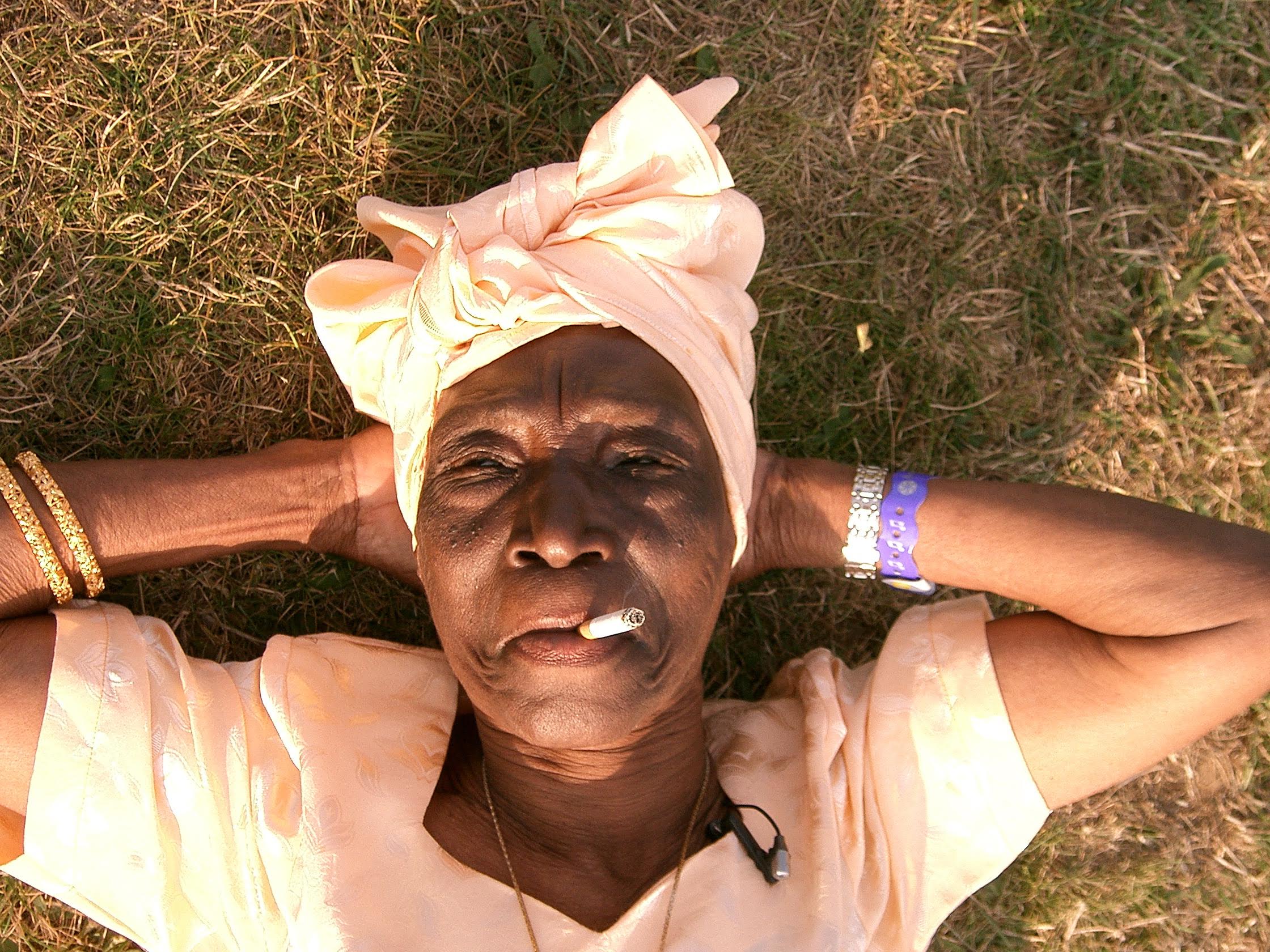 I have never seen a woman ride a drum before, like a goddess rides a tiger…I have never seen an artist / male or female / anywhere across the world / own her instrument / like it grew out of her belly / like it was welded to her thighs. — Shailja Patel.

Where does one conjure the words to describe this image of Bi Kidude? How does one write of how she looks right into the sun’s eye, threatening it with the fire in her mouth?

How does one write about Bi Kidude?

Those who have been bold enough to write of her refer to her as a fast-talking, chain-smoking, rebel-rocker, ageless and endless. Andy Jones, a UK filmmaker and personal friend of Bi Kidude who collected footage of her before her death in April 2013 and turned it into a feature film, “As Old as My Tongue,” describes her as a force of nature with a bone crushing handshake and a fierce wit, a singer who somehow sounded like a cross between Bob Dylan and Nina Simone, and a percussionist whose conga drum was bigger than her.

And often, she is quoted… “Don’t be afraid of taking pleasure and being odd in public.”

In this image, Bi Kidude holds the cigarette like something that is not an event, even as I try to make it into one. To me, this moment is radical; it is provocative in a way that is not necessarily intended. To Bi Kidude, it seems mundane; that carefree black girl engaged in a moment of simple pleasures. A cigarette in her mouth and the sun shining on her face. Why must it surprise me? Why must I make an event of it?

On my Twitter timeline, this image is repeatedly memed, mostly accompanied by the word “mood,” like a license one presents to themselves before entering into a carefree zone.

This image is the beginning of a family of images through which I have known Bi Kidude. It reminds me of another one, and another one. There are images of her confronting a microphone with the impossible largeness of her voice in a studio or in front of a crowd.

Everything around her pales in comparison, and she becomes that overwhelming presence that tells you that she has been here for a while, that she knows the world, that she has seen things you will never know and that she has lived the best years of her life. This similar presence is felt in the images of her holding a drum tightly between her thighs, riding it like a horse and drumming the
music out of it.

In the short time I have known of her, I have memorized images of Bi Kidude’s life as if trying to conjure the memory of someone long lost and loved. In these images, her music comes to life.

I remember the first moment I was overwhelmingly aware of Bi Kidude’s presence. It was also the same time I became aware of her absence. I was sitting in the dark during a solitary trip to Zanzibar at the Sauti za Busara Festival in 2015, surrounded by people I did not know and the hoary walls of the Old Fort in Stone Town. The only light at this moment that stays with me was from the images shifting on the wall, one after the other. And then there was the smoke-filled voice of Bi Kidude and that frightening power in her lungs. I remember how terrifying her voice was, and I could almost smell the cigarettes in her. A documentary by Andy Jones, “I Shot Bi Kidude” was being shown. As I watched this documentary, I Andy Jones, “I Shot Bi Kidude” was being shown. As I watched this documentary, I
felt an overwhelming sense of loss. Not of her, the musician who had died two years before my sitting there, but the loss of having never known her, a nostalgia of someone I never knew and a deep envy for those who experienced her and her music while she was alive. I imagined going to a Bi Kidude’s performance, being in the audience, in the presence of this old, wrinkly woman. And as I sat in the dark
and watched Andy’s film, I mourned Bi Kidude, for all the years I never knew her. This was also the first time I saw this image of Bi Kidude resting on the grass, threatening the sun with the fire in her lips.

Andy Jones has very vivid recollections of the moments leading to this image. It was the summer of 2004 and he had spent many days with Bi Kidude, either at home or out recording the memorable scene on the jahazi which eventually became the opening scene for “As Old As My Tongue.” He tells me by email that the day he took this photo was the end of their 24 hours together in England. “I’d
met her off the plane at Heathrow, then accompanied her on the bus to Reading where she was due to perform at WOMAD.”

And so after an amazing performance in front of a crowd of thousands of people, when the rest of the band had already gone back to the hotel, Bi Kidude, Andy, and Sharon, their Kenyan translator, decided to lounge around in the sunny grassy hill,
watching people go by. “Sharon had gone completely off-piste, asking her loads of questions about her previous boyfriends, and Bi was doing her best not to give us any straight answers.”

Andy then pulled out his digital camera and held it up to take a photo of himself and Bi Kidude. “She was still lying there, smoking and knowing that the camera would love it—she always had a real sense of that.” He wishes he had taken more photographs of this moment. “Looking back through the album there are only two
images; one with, and one without a cigarette in her mouth. I’m pretty sure it’s a Galouise Blonde that she’d brought over from France. Her usual supply of Embassy Reds that she brought over from Zanzibar having long since disappeared.”

Born Fatma Bint Baraka, the daughter of a coconut creeper, Bi Kidude is remembered in several ways. To many, she is the queen of Taarab, following in the unsurpassed footsteps of Siti Bint Saad. Bi Kidude was also the queen of Unyago, which was sacred to women; a right of passage in which sex education was given to
a bride-to-be.

It is impossible to speak of Bi Kidude without speaking of Taarab, of how this music has survived and why this image of her is so important. In her paper, “It’s Just Not Fun Anymore,” Laura Fair traces the journey of Taarab through the Zanzibar Revolution. Before the revolution in the early 60s, Taarab clubs in Zanzibar were controlled by women. They are the ones who decided who came into the clubs, who played with them in the bands, and what content was sung and produced. But in 1964, the year of the Zanzibar Revolution, this autonomy was lost. Under the Afro-Shirazi Party, the state took over control of these clubs and appointed men who now determined what women would perform. As with mainland Tanzania, the state also begun using these bands as instruments of its own propaganda. Women now no longer shaped this production. It was no longer
that fun place they knew, no longer a place of freedom where they could immerse themselves from the exhaustions and the restrictions of the day and become poets. In one of the interviews by Laura Fair, an unnamed Taarab singer from Zanzibar remembers the good gone days:

Oh we danced! We danced and played! Oh how I enjoyed myself
in those days, dancing brought such delight! There was no order,
no command to perform. Whatever we decided to do, wherever
we decided to go, this was indeed what we did.

In the subsequent years, the art space became misogynistic, existing only for the pleasure of men and the glorification of the state. Censorship by the state meant that those who played in these clubs sang songs of praise for the revolution, for the new president, for socialism. They sang in praise of the flag.

While most women poets and Taarab singers lost their interest completely even after Abeid Karume’s assassination in 1972, some like Bi Kidude survived these times. Even though she became visibly active in the later years, she continued to embody the freedom Taarab held for women. When describing this music, she says that for her, it is like throwing oneself into the sky. The image I speak of is the personification of this freedom she embodied, of the enjoyment that Taarab brought for women.

Bi Kidude challenged life the same way she challenges the sun in this image, with fire between her lips. And indeed there was always fire in her lips.

In a lot of her interviews, Bi Kidude appears as she appears in this image, carefree. Rarely does she sit on a chair. Often, she is holding a cigarette or a packet of cigarettes. Here, I am tempted to make a parallel with the torches of freedom in America’s 1900s where cigarette smoking was somewhat equated to emancipation, a symbol of women’s freedom. But I do not. I am careful about placing labels on Bi Kidude. But I recognize her, I recognize the thing she was doing, and what that could have possibly meant for women in Zanzibar and East Africa in general. Still, she was conservative, a beautiful body of contradictions. Severally in interviews, she insists that young women must dress properly, and especially those appearing in Bongo rap music videos.

“…maana mtoto mwanamke kitovu kikionekana, matusi!” It is a shame for a woman’s belly button to be seen.

Andy Jones, while talking about his first encounter with Bi Kidude remembers her as a “shriveled and shrunken presence sitting in a panel of women discussing her influence on women’s cultural practice in Zanzibar.” And what a contrast she was immediately after when she sat on her drum and rode it, beating the music out of
it and out of herself. Perhaps, there is nothing rebellious or phenomenal about holding a drum between one’s thighs, or resting the head in the pillow of one’s hands and smoking a cigarette while staring at the sun. Perhaps it is the whole presence of Bi Kidude that terrifies me; something in the person that she was.

When she was 10 years old, Bi Kidude ran away from home. Twice, she was married. Twice, she was divorced. Her life, a journey of looking for that free place. In one of her interviews, she speaks of living the life of a sailor. “I would dress like a sailor, and you would greet me like a brother.” In this image taken just a few years before her death, she seemed to have found that place.

In her own words, she summarizes herself: “I drink, I smoke, and I sing…I do not need a microphone.” I want to read more into this. “I just sing,” she says. So I leave it.

A Man Smiling to His Death

On Thursday September 9, 1971, the morning after Ishola Oyenusi’s death, his photograph was published on the front page of a…

We forget to remember the names of those we killed on our way here. —Keguro Macharia They shall build up…