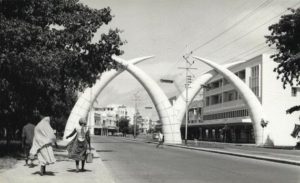 Princess Margaret, the British Queen’s younger sister, visited Kenya in 1956. On this occasion, the Kenya Colony commissioned an aluminum sculpture resembling two pairs of elephant tusks. Since then it has become the hallmark of the re-named Moi Avenue, and indeed of Mombasa. The elephant tusks were not an accidental choice for a public sculpture, as they represented British involvement in the ivory trade. Growing up, I saw many postcards of Mombasa with the picture of this sculpture, its sharp white tusks contrasted against a bright blue sky, and busy Moi Avenue. Small miniature replicas of this sculpture are still in production, and are often designed in a metal alloy for use as a trophy. In some way, the tusk sculpture in miniature form was a symbol of power that marked class or popularity in local corporate circles in the East African region.

The heavy feeling you meet in the poem thus runs contradictory to City ya Raya, or Mombasa, the city of ease. The incidents that I refer to here are historicised as the Kenya emergency that began in 1952, when white settlers used violence to quell a series of protests led by Dedan Kimathi. These intense episodes are easier illustrated on the backdrop of the cold and mountainous Kenyan highlands; the political martyrs of Ngugi wa Thiongo’s short stories, murdered at the doorsteps of white settlers. This kind of colonial-era murder mystery is a world apart from the ivory trade that has shaped the history of the Kenyan coast. I struggle with the abrupt transition in Wambui’s poem from this animal-character going through a heart seizure to ‘The Port of the East Coast’ and its luxurious capital of ivory.

Yet I’m equally fascinated with this non-revolutionary depiction of Mombasa (as Vasco da Gama wrote in an earlier time, its mosques are masterfully made of ornamented wood), by evoking its long and entangled history with ivory. Wambui sees the soap-stone goddesses resembling African elephants as an outsider perversion, yet the coastal people have for many generations produced ornaments and objects out of ivory. An anthropomorphic object carved out of ivory, and believed to represent the power of Zanzibari Sultanate, is on display at the Kenya National Museum. This elaborately carved Zanzibari object shaped like a sword, and installed next to other power symbols, such as the Kamba royal regalia, made from the hide of Colobus monkeys.

According to the author Martha Chaiklin, colonization had a significant impact on elephant populations since the 19th century. Not only were large tracks of land cleared for mechanized agriculture, limiting elephant habitats, but she also speaks of sports hunting, referring to a “Captain John Rogers who was reputed to have bagged over 1600 elephants in Ceylon in the 1820s.” Before this period, China consumed ivory in such a large measure that the species of elephant natural to China became almost extinct. Yet, China’s demand for ivory did not decline after the 19th century. The soap-stone goddesses shaped like elephants, may have existed before China’s huge demand for ‘true’ ivory–that removed from the African elephant species, and imported from the continent. The willful poaching of elephants in many game parks across the African continent is hardly an industrial risk as stated by the poet, but rather the enormous demand for ivory in China, India, and Europe builds on a colonial legacy and relies largely on the near extinction of elephant populations in China and other Asian countries.

Our Hearts as Brief as Photos

At sundown one spring afternoon, in New York City’s West Village, we sat on a bench. We held hands and…

If I Could See Your Face

As I write now I recall a memory, a memory of being in my late teens and thinking I’d contracted…