At sundown one spring afternoon, in New York City’s West Village, we sat on a bench. We held hands and talked about our pasts.

I asked her, “How did you end up in New York?” She told me of a night in Châlonsen-Champagne when a stranger left a thousand euros as a tip for her, in the restaurant she worked, and this is what made it possible for her to come to New York. A stranger whose face she only remembers ennobled by a hat, whose jacket smelt of stale beer, and who’d asked about her plans. In another setting he’d be deemed a vagrant.

While she spoke of a stranger, a woman appeared in the Jewish cemetery opposite us, standing beside tombstones last engraved in the 1890s. She resembled a cook who steps out of a kitchen to get some air. Her apron was made from fabric used to wrap a newborn or corpse in parts of Senegal. The woman stepped closer to the bars that cordoned the cemetery from the passageway. Seeing us stare, she waved at us. We smiled and waved back. “Could she have known,” my friend asked me, “about the shroud?”

“What’s new in your life,” I asked instead.

“Serge! He’s good with his hands. He makes beautiful things. Smell this,” she added, and held my head closer to her scarf. “He mixed the perfume himself!”

I thought of his hands. Two years later, I saw a photograph in which he held the horn of a cow. He wore a hat surely woven by hand. He opened his mouth in mock bravado. The cows were in a ferry. There was a Mitsubishi truck at the edge of the frame, and a hand resting on it, a finger pointing downwards. I thought the forest I saw beyond the sea was a part of Casamance, and I considered this uncertainly. I saw the white of the sea merge with the white of the sky.

When I turned after she spoke of Serge’s hands, I saw the coffee shop I’d gone into once without money. I played a trick on the barista. I ordered coffee and he brought one and I gave him my debit card. He swiped it and the transaction was declined: insufficient funds. “Oh my God, that’s strange,” I said. My card wasn’t issued in America, so it occasionally misbehaves. He smiled. “It’s on the house!”

Her response to me was, “He’s been here for eighteen years.” What she learnt so far was that Serge was a man of several pasts. He’d co-owned a restaurant. As white people took over the neighborhood and rent shot up, it was taken over.

Months later, she took me there. The new coffee shop in place of his restaurant had paintings on its wall for sale, a red couch on the corner, several chattering customers, and some who stared at us as we sat.

“See that coffee maker they’re using—it’s his! Oh these tables! He built them! Look at the wood, Emma. See how good it is? What coffee shop has the same kind of wood in the whole of Brooklyn? Even the mugs are his! What the fuck!”

I held her hands to keep them from flailing. No, I thought, no testiness here. To her I said, “Things will work out.” If she believed me she showed it by staring into her cappuccino.

“Yesterday,” she recalled at the West Village bench, “I watched him play in a bar. So good! Everyone stands up to dance when he is drumming. I think that, actually, he’s possessed when he is on the drums. Not so when he’s playing the guitar or kora. With the kora he’s always trying to get it right. He listens to too much of Toumani Diabeté. The first word I thought of when I watched him play the drums—you know my English is bad—was ‘earthquake.’”

All ground on which the recollected past stands is seismic. A man’s life unfolds in tremors of memories, juts of crushed brick.

I know Serge in a photograph, taken during one of his visits home. He’s on a ferry, not the ferry with the cows. Unlike the other photograph the horizon consists almost entirely of a dense forest, bordering sea and sky. He poses with a younger man, his cousin. It appears their journey has only begun. They sit on the ferry’s railing. The surface of the bowl-like drum he carries on his laps is green. Both men rest a hand on the drum.

There are many photographs of Serge performing in Central Park, frenzied while drumming. For five successive summers he belonged to a band that entertained New Yorkers, catering to hedonistic energies. “Imagine all the bodies set alight by his rhythm.” My friend didn’t find this apt. “You mean all the women throwing themselves at him?”

I hadn’t known her as protective of men, or in the colloquial sense, jealous. I knew her for the things she discarded, charged emotions that quickly became trivia, boyfriends who wouldn’t work, a wallet of valuables she forgot with me and never retrieved. Thus I recognized what terrified me. She’d found what she could keep.

Yet in a sense her stories of Serge were of a man whose generosity couldn’t be matched by her devotion to him.

“What can I do to bring back all he’s lost?”

Nothing, I told her with my silence.

Everyday questions. What is lost, who is dispossessed, and who repatriates the dispossessed.

The woman in the graveyard across the road now stood in front of it, resting her back against the bars. We hadn’t seen her emerge. A revenant? Her cigarette in mid-air, she seemed completely unaware of us. She raised her head towards the sky. The movement of her lips suggested sucking in rather than puffing out. “I think she’s meditating,” I said, aiming to make a joke of the situation. But my friend stared intently at her. I couldn’t explain her growing, as if gnawing sadness.

All I knew were her hesitations: Why have I, a French woman, fallen in love with an older Senegalese man? Our lives are set tectonically apart. Our future together is hard to see. 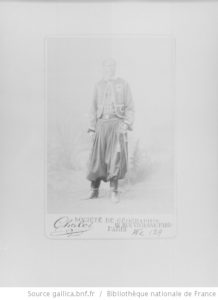 It was then she took out her iPad, and scanned through folders for the picture of a Senegalese tirailleur. I sometimes think this is Serge’s grandfather, she said, but it’s not. “Hahaha.” Her laughter was so loud a man with a cane walking on our side of the street stopped and shook his head at us. We didn’t acknowledge him—I muttered “asshole”—and returned to considering the picture. The tirailleur held a ceremonial sword, strangely antecedent to the man who considered us indecorous.

“The picture is badly developed,” I said. He was framed by a gray mistiness, his visage almost entirely beclouded. I couldn’t tell if it was faux foliage behind him, the backdrop of a studio, or if he was standing in front of stunted shrubs at the entrance to an esplanade.

“Do you know,” she said, “Serge’s grandfather was part of the men who protested at Camp Thiaroye?”

I shook my head. “Oh, wait. Let’s go to the piers! If we walk towards Eleventh Avenue, past the highline, we’ll get there. You’ll enjoy the view of the sea in this weather.”

Once we danced together at a party in her house, the first time I heard Orchestra Baobab, which I mistook for Buena Vista Social Club. But the music changed incessantly, until we were dancing to love songs of uncertain origin. I thought her hips swayed lightly, easy to be held. Doesn’t desire double in a low-lit room with saccharine music? I restrained myself, thinking of the man she loved. This was soon after the day we sat on a bench in the West Village. 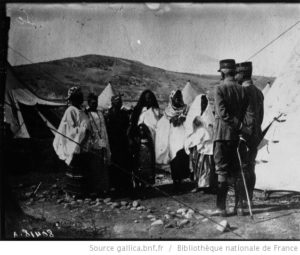 But desire doubled is equally desire cancelling itself out. I know Serge’s sister in a photograph taken on her wedding day. She’s smiling. She’s holding a bouquet of plastic flowers, her face seen from the side. The photograph is torn, halved, and bent along the edges, so that a part of the groom’s suit is not immediately in view.

To unfold the photo is to see her in a side-hug with the groom. While the groom’s dark-grey suit is partly visible, his face, the rest of his body, is ripped. Hmm, I wonder. Ripped, by the sender in Dakar or the addressee in Brooklyn? By Serge or his sister? To forget the groom—for whom does this require a half-torn photograph? Possibly for Serge: to see a woman he’s always loved in permanent radiance.

At the pier there was a rope floating on the water. What unmoored ship I couldn’t

tell. When I pointed it out she became withdrawn again. I let the silence stand.

Why does she incessantly make the day sullen?

I know Serge in a photograph with his younger son, a toddler. The picture is entirely out of focus, including the trees, which seem like dashes of green paint. They sit on a horse, possibly in motion. He holds his boy, who turns in a sidelong glance, around the waist. His head is held forward—slanted nostalgically, one might say. It will matter to anyone who sees the photo in Senegal that the little boy is biracial. It will matter for what it says to Serge’s family about their movement in the world. This is a child through whom our lineage unfurls further. We are claiming more Diasporas.

A version of this essay appeared on the website of “Photographie et Oralité:

At an art exhibition in October, I saw an acrylic painting of what I could only guess was a South Sudanese…

Princess Margaret, the British Queen's younger sister, visited Kenya in 1956. On this occasion, the Kenya Colony commissioned an aluminum sculpture…