According to Christian doctrine, no one has seen God. But there have been attempts to illustrate him. There’s a long religious history of iconoclasm, in which supposed heretical images were banned or destroyed, particularly when image-makers attempted to depict the face of Christ. Yet the message of Christ has been passed on through the work of evangelists. If God cannot be seen or represented by human hands, his messengers can, vicariously expressing his power. And so, I suspect that preachers are pictured in the form they assume God has allowed them to take.

A lot of Nigerians are familiar with photographs of preachers. Preachers in distinct poses, whose faces are reproduced on posters advertising evangelical events, on stickers with prophetic messages, occasionally on shirts and key rings and mugs and utensils. It is possible to broadly categorize the poses of Nigerian preachers. One pose is the expressive face, smiling or poised in mid-sentence, holding a microphone or clasping otherwise empty hands. This first pose is basic, like a photo made for identification—the faces of men, or women, or spouses. The second category of poses, however, has a fantastical—even outlandish and comical—premise. I have seen, for instance, a preacher pictured in an army combat uniform. Another’s upper body is positioned above a ship and armour tank spitting boisterous flames, whose hands direct the flow of destructive fire. Here are preachers with orchestrated poses, matching the captions of their posters or billboards. This broad categorization is easy to discern. The surfaces of today’s public space are covered in evangelical poses. 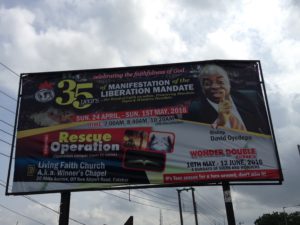 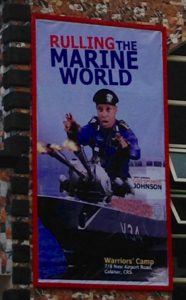 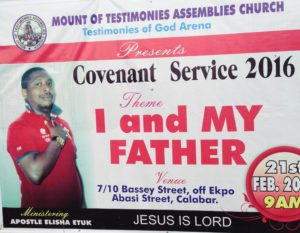 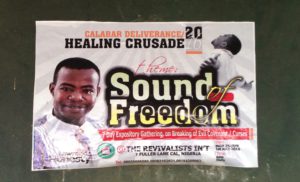 The preacher’s face and pose displays intent. This might seem commonsensical. I acknowledge it regardless, knowing many Nigerians are acclimatized to seeing the faces of celebrity preachers. However, not many, I perceive, reflect on the intention of a preacher’s face. To see the face is to believe in limitless ability. Without the preacher’s face, wouldn’t Christians become less trusting of an unseen God?

“…The Lord used to speak to Moses face to face, as a man speaks to his friend…When Moses came down from Mount Sinai, with the two tablets of the testimony in his hand as he came down from the mountain, Moses did not know that the skin of his face shone because he had been talking with God.” —Exodus 33:11; 34:29, English Standard Version.

“Seeking God’s face” is a suggestive term used by many preachers to refer to time spent in prayer. As with Moses, who received the commandments on a mountain, the face of God is reasoned to reflect its glory on a beholder. When preachers who seek God’s face are pictured, they present their bodies as portals with a mandate to reveal God. This mandate, if my interpretation can be stretched, is to be shown in God’s image. And if stretched even further, if all the faces of preachers reflect the face of God, how many faces can be attributed to Him? I do not doubt God as a multi-faceted being. The tricky thing when I look at a preacher’s human face, returning to Chris Abani, is that what claims to uncover, to reveal, can often obfuscate. If there is a face value, a fiat of measure, then the opposite is implied—apparent value; as in, don’t accept promises or claims of face value.”

While considering the representation of today’s preachers in public space, I turn to their forerunners, earlier Nigerian preachers whose faces remain plastered on church walls and signposts. Two prominent examples: Joseph Ayo Babalola and Bishop Samuel Ajayi Crowther. The former founded Christ Apostolic Church, and the latter is revered for his work on abolishing slavery, education, and evangelism. I am interested in the photographs of these earlier preachers. Ways in which they preempt today’s photographs.

To preempt; to make legitimate. In southwestern Nigeria for instance, the iconic photograph of Joseph Babalola, who died in 1959, is frequently placed on posters bearing faces of living preachers. This is not a cheap gimmick by graphic designers. By making reference to older, Saint-like preachers, today’s preachers hope to claim for themselves a similar level of acceptance, entering into popular religious history. Arguably, the photograph of an evangelical preacher belongs to a timeline of images that reaches backwards to illustrations, if any, of Christ while on earth.

On a good number of evangelical posters, preachers are pictured as a couple. What strikes me often is the prefix appended to the woman’s name—“Mrs.,” “Rev. Mrs.,” “Pastor Mrs.”—titling her as her husband’s companion in ministry, as in life. Posters of married preachers tell me something familial is at stake. A preacher’s legitimacy is risked if he is unmarried. Particularly, a woman’s ministry is questionable if she is marriageable and yet single, or if she isn’t widowed. These posters, essentially, are full of male supremacy. Of course God, as many agree, is male. 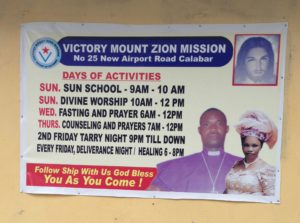 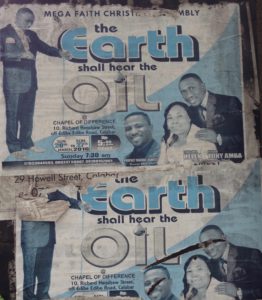 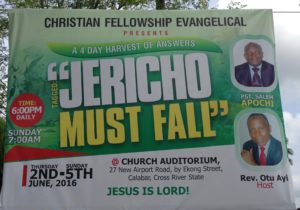 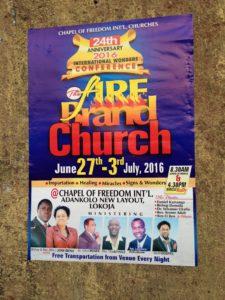 These posters are items of evangelism. But I sense that what’s evangelistic about the image quickly tapers into what’s exhibitionistic. A preacher is at once an evangelist and a kind of salesperson.

Most posters are captioned with promises, targeted at an audience of the sick, poor, unmarried, uneducated, or brokenhearted. Repeated endlessly, each new poster, every forthcoming evangelical event, continues a cycle of aspiration. The walls and billboards are reflective—a country of mostly broken people, trying out new sources of inspiration, however outrageously depicted in an evangelical poster.

Evangelism is proliferation. Nigerian Christianity, from the 1980s onwards, has meant, in Christianized cities, half a dozen churches on every street. There is nothing exaggerated about this claim. Christians want the gospel to reach the ends of the earth, its impoverished ghettoes and gentrified towns. But there are Christians, like myself, who question the ease with which men and their wives declare themselves mouthpieces of Christ, uttering his utterances, discerning his intentions. And in considering posters lacquering walls and public surfaces, promoting evangelical events, my skepticism enlarges. I want to know if every pictured preacher, in each poster, represents the God of my faith, or has beheld His face.

A Web of Evidence

In his book on the early years of Uganda's independence, historian A. B. K. Kasozi notes the tragicomedy that the…

The Confession of a Witch

A woman I know, when she was about ten, or a little older, was accused of being possessed by the…