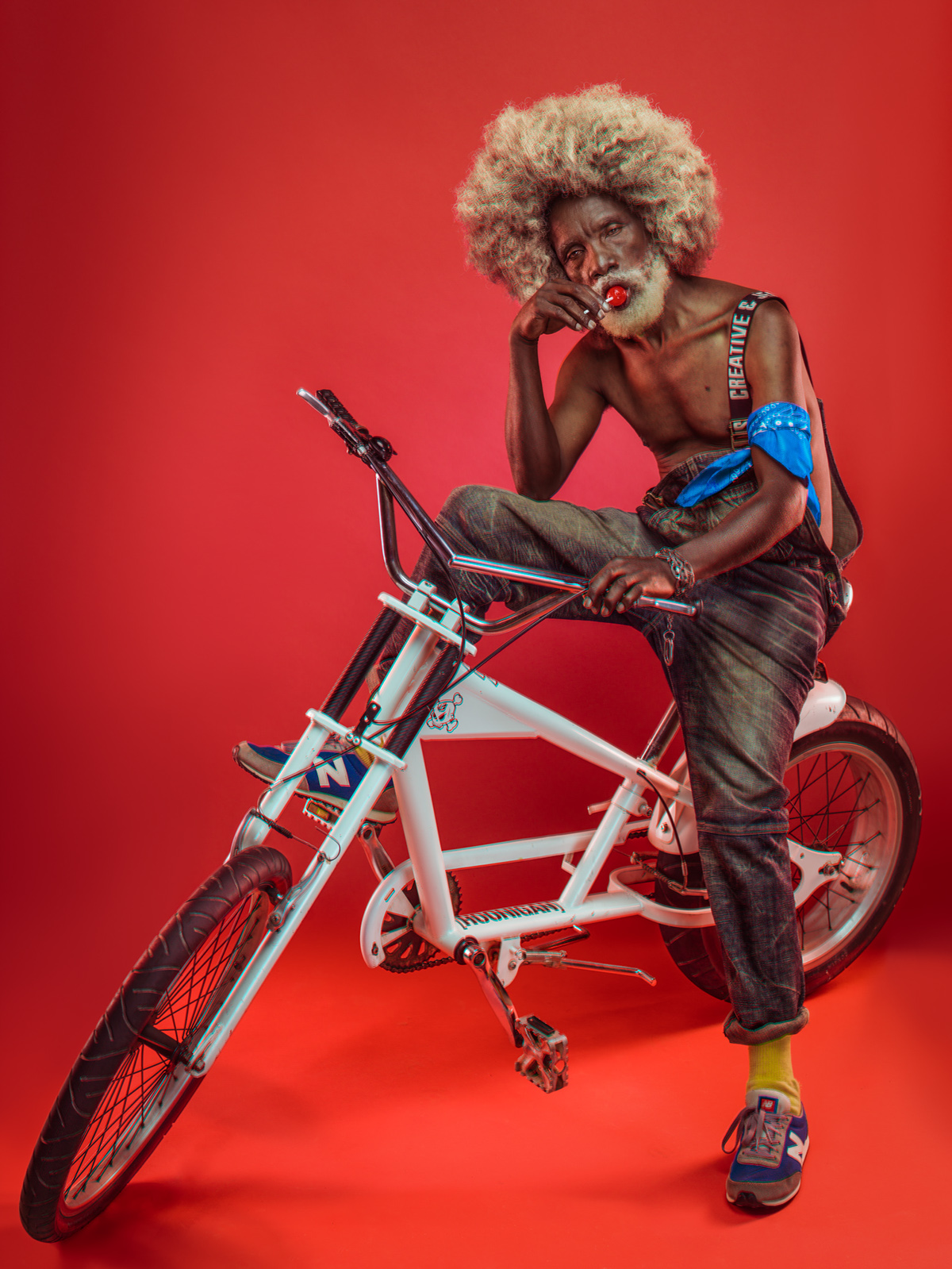 Osborne Macharia uses these words to describe one of his recent photography series, Macicio, where he fictionalizes a special unit of five opticians within Kenya’s freedom fighters, Mau Mau. This is only one of the many series where he attempts to “change perceptions” by focusing on what he calls the untold story, somewhere in the “unphotographed” or the “unphotographable,” in the shadows of popular images. His camera, he says, is drawn towards “ordinary folk one wouldn’t notice unless they were in front of the camera.”

I met Osborne Macharia during the 2016 Capture Kenya, a project by Kenya’s telecom Safaricom. Like many of Macharia’s recent works, this project set out to tell “the unseen side of Kenya,” collecting images that wandered away from the stereotypes of violence and poverty. The final images, which were published in the Safaricom annual calendar, would become “an invitation to look at things differently.”

“We realise that in recent years, our national focus has primarily
been on the bad and the ugly, leaving only whispers of the good.”

The project went further to describe itself as:

“a call to action, encouraging us to take ownership of our
reputation and tell positive stories about Kenya, as they should be
told”

I was part of the group photographing Western Kenya with Migwa Nthiga while Osborne Macharia photographed Coastal Kenya with another team. My task for the project was to write about the “dailyness” around the other image. We were here to recreate the beautiful. To forget the horrors. To find that bearable image in the dark shadows of the past.

In quiet moments between stops, as we looked for the unseen and the beautiful, I was constantly reminded of the horrors I had known those places for. Kisumu city reminded me of the 2007 post-election violence in Kenya. The bloodied face of a man who holds a panga like a soft thing, ready to fight again tomorrow and the day after. The face of a grieving mother and the body of her son. Each day in the
morning as we sought the beauty of the sun rising over the Nandi Hills, over Lake Victoria, I was haunted by these ghastly images.

Mt. Elgon, Kapenguria, Ortum; we found beauty. Oh, we did! But we also found places heavily burdened by history.

At one point, while photographing the Milky Way above a dry dam, I remember a tension between two groups from a village in Ortum. The area chief had warned us against photographing in the night, but we were relentless. When they came, they made a claim to the dam and expected all the kindness we had in money. None was willing to share with the other. And so they yelled at each other into the night, and we waited to photograph the beauty of the night.

In Kakamega Forest, a warden I remember fondly showed us the beauty of the forest and warned us of its horrors.

You are taking aerial shots. Yes, it is beautiful, but I need to tell
you of the horrors hidden under the trees.

He told us of the days spent walking for hours, hunting men who hunt trees.

You find one, you shoot him on the leg.

On a good day, he shot the leg. In between his tales, we photographed the beautiful misty forest and hoped he was only exaggerating. We sought beauty, but the horrors sought us too.
——
It is in this frame of mind that I come to Osborne’s work. In one of his recent series, he tells the story of four gentlemen in the heart of Kariobangi who call themselves Kabangu.

“This is the story of 4 gentlemen in the heart of Kariobangi (one
of Nairobi’s informal settlements) who call themselves Kabangu.
A group of real hip hop heads from the 80’s who meet up
regularly to educate and mentor upcoming young talent
venturing out into the hip hop industry. They teach them on
values such as peace, equality, prosperity and social justice.”

What is left out when the camera already knows where it is going and what it is looking for? What is forgotten when one is only looking for beauty? One could argue that such work that sets out to look for beauty in a place like Kenya is an attempt to look away from the reality. One could also argue that this is a pessimistic exaggeration. In the presence of Osborne’s pictures that seek out
beauty where beauty isn’t, perhaps this is the wrong time to ask about the other side that the camera seeks to escape. In The Theatre of Memory, Raqs: “…what can be only recovered through fantasy, through speculation, through the oddness, humour and irony…”

My favourite of Osborne’s recent work is Nyanye. He imagines three women who — now retired — spend their time traveling across Africa, living the life of luxury. 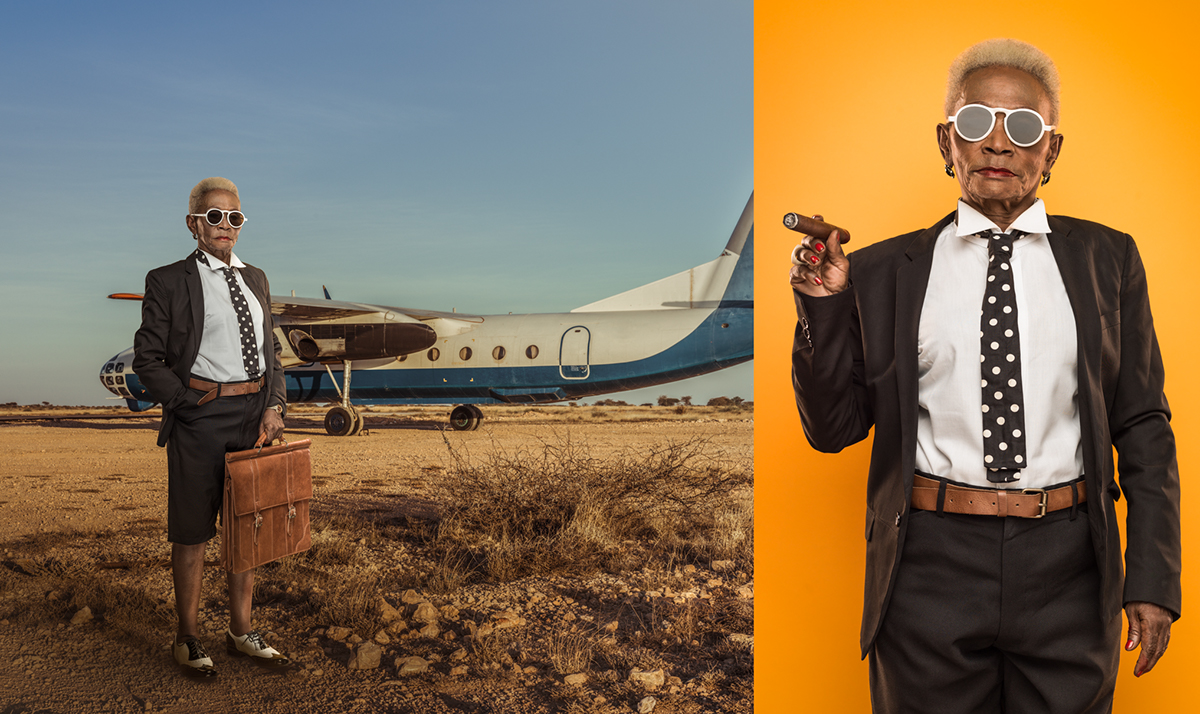 “This is the story of Kenya’s league of extravagant grannies who
were once corporate and government leaders in the 1970’s but
are now retired. They now live the retired high life travelling to
exotic and remote areas within Africa to explore, Party and enjoy
in exclusivity.”

How impossible! And how wonderful it would be for such women to exist in Kenya. Perhaps that is the point. To dream. To see what is not here. In creating his own reality, in guiding his camera, what does Macharia’s work tell us about what is not here?

In a Twitter conversation following the “Nyanye” series, someone swears that these women are real, and that they are wanted for corruption charges. Even as the statement accompanying these images states clearly that they are fictionalised, she swears that a simple Google search will prove to anyone who is looking that she is
indeed, right.

I see it. I see how one would swear by this. I see how images of such excesses can arouse conviction. We know what we know. Our eyes are the product of associations.

On Facebook, another commentator refutes the “Kabangu” series: “I am from Kenya and I do not know a thing about this man! Where did you get this story?” Osborne is called upon to justify his fiction. But what is fiction? What is true? To the one who refutes this story, it did not happen because he did not witness it.

I am torn between these things. I am torn between reality and the space of dreaming; beauty and horrors. Images such as Osborne’s invite us to see things differently. They punctuate reality with dreams and horrors with beauty. There is a danger to it and there is safety in it. Binaries. But is it possible that all these are just the same thing? What terror resides within the beautiful? But, we do not always need to find the answers. Questions are enough too.

Writing and The Trans-African

This conversation started via email between the contributing editors of The Trans-African, Ndinda Kioko, Serubiri Moses, and Emmanuel Iduma. We…

A Web of Evidence

In his book on the early years of Uganda's independence, historian A. B. K. Kasozi notes the tragicomedy that the…