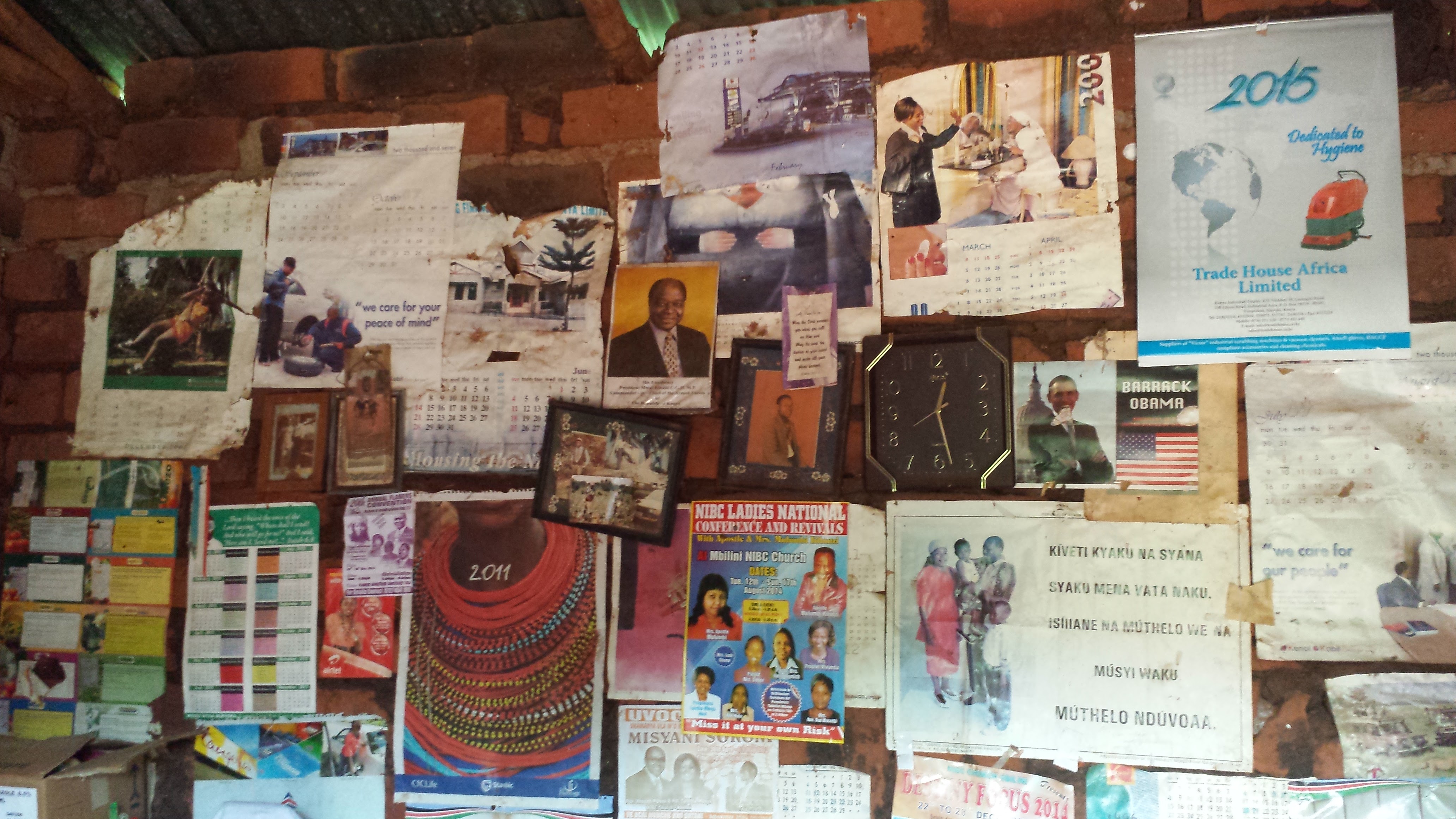 “Walls are a marvel; don’t you think? I’ve always paid a great
deal of attention to what happens on the walls… {…]. And how
many times have I been tempted to pause in front of a nice wall
and carve something on it?
—Picasso

Consider a wall. Consider the secrets kept between man and wall, an intimacy that is possible between them.

This man is my uncle. On his wall are tattered pages extracted from calendars he has collected over the years. Often, during his tea moments in the morning, he will listen to the radio, staring at these tattered pages with dust and discoloured images as if they care for him, as If he can hear them, as if he were in a silent conversation
with these pieces of paper. It is an obsession he shares with my father, and often I have wondered if this is a childhood pastime, a place in which they meet in their adulthood, even as they continue to grow apart.

Recently, returning home more often than before, I find myself paying particular attention to these calendars. It is on these pages that my auntie has made a phonebook, collecting phone numbers and scribbling them on the edges. It is also on these edges where she stores her needles. For my cousins and I, these calendars collected by my uncle have existed as pieces of paper that shelter the house from the bugs and the light entering the house through the cracks. These pasted up tatters hide the secrets of a family, the lack of means, the cracks on a wall that is badly in need of plaster and paint.

I do remember visiting him a day before Christmas last year, and asking for his album. It is a thing I do whenever I visit friends and relatives with whom I share silences. The album becomes a historian in the room, and it fills the silences with something to speak about; the surprise of how much time has passed, the remembrance of those in the pictures who are no longer here. While he had very
little to show in his album, there was a lot of memories to share from the calendars. In this case, the pasted-up tatters become the album of his life, a much needed historian to fill the silences. 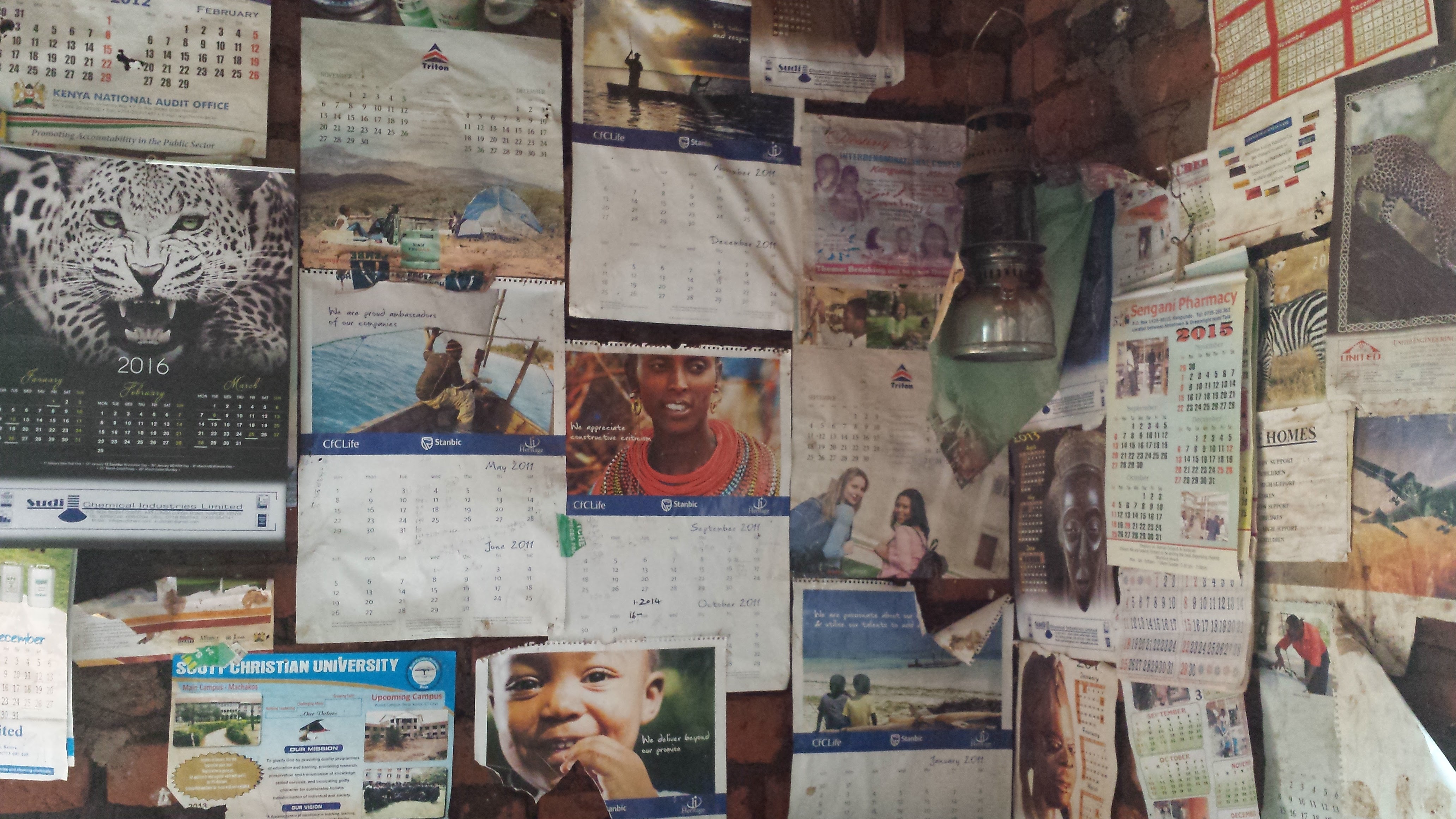 During other visits, I have watched him watch these calendars. Often he looks at them as if seeing them for the first time. While he reveres in these memories, often his face becomes that of a man with unfulfilled dreams; a man full of regrets. Through these calendars, he projects his repressed dreams. He remembers days
when he was in Upper Hill High School, a prestigious school for a farm boy like him. He remembers it almost regretfully, as of he wishes for a better life for himself. Somewhere in there, a broken promise; as if being in that school itself should have assured him of something else, somewhere else not here. On this wall
is the story of loss, of things that were once possible, the boyhood dreams of a man. A wall-map of a life lived or could have been lived.

But there is also some truth in the child’s desire for the alternative life of an image; wanting to be the people in these images. My earliest memory of these calendars is a woman with her hair combed out in an afro sitting on a horse. It was an advert
for Sportsman cigarettes, and this life did seem more alluring than the one I lived. There is that image that comes to a child’s mind a few minutes before sleep. For many nights, this woman became a character in my fantasies. There was nothing extraordinary about her, but I had wanted to be her. It did seem like an exciting
life to wear trousers like she did with no care, comb one’s hair out and sit on a horse. Dreams on a poster. These calendar images told my cousin and I that we could be anything we wanted to be. We just had to choose a character and fill our dreams. My cousin became the woman photographed with her hands on a typewriter, and I became the one sitting on a horse.

For my uncle, there seems to be a deeper connection between him and his calendar collections, such that if one was to tear the edge off one of them, he would know. While talking about them, he moves from one tatter to another. They all become segments of a story. A calendar that reminds him of his days in school
leads to another one of his first jobs as an accountant and then another one of his days as a farmer.

For him, these calendars then exist not just as a cover to the wall. It is also not much about the dates, but the accompanying images. For his farming days, he has collected cut outs from calendars gifted to him by pesticide suppliers. Those of his days in school have in them images of musicians he liked at the time, of the then president of Kenya, Daniel Arap Moi, and then other images of the city. There are
images and calendar pages from election years with manifestos from his favourite candidates. It is a history of political affiliations, propaganda fragments, of election years. There are images of products we have all long forgotten, cigarette ads, images of preachers and an accompanying Bible verse, a reminder that AIDS kills.

It is also not just about the images in isolation, but also about the stories that these images resurrect in him. In some way, these calendars are to him how he remembers. Like many collections for the collector, it seems to be an assertion of his own existence. These calendars and their accompanying images are his memories pasted on a wall.

Now looking at them now with a curious mind, they speak of a desire to be seen, to assert himself in his own home, with or without an audience. He maps his own lived experience on the wall. It is through looking at these images from calendars with him that I find out my uncle was once in prison. It is also through these images that I find out he had a wife before the one he has now. On these walls are memories of a man secretly plastered, memories that only he understands.

The images remain private, even as they stay publicly plastered on the wall of a living room that he has—over the years—shared with all and sundry. While I have compared these images to a family album, I think of the secrets they hold for him. They are a public display of secrets that only he knows of. But visible to everyone
like graffiti on a wall on the street where masses frequent but only the one who draws understands what is depicted.

They mean something to him that they will never mean to another. An object of his private reminisce. A visual vocabulary that is accessible only to him. His memory on a wall.

The Confession of a Witch

A woman I know, when she was about ten, or a little older, was accused of being possessed by the…

For LJB Hannah Arendt differentiates between thinking and violence: "a gulf separates the essentially peaceful activities of thinking or laboring…