On Thursday September 9, 1971, the morning after Ishola Oyenusi’s death, his photograph was published on the front page of a national newspaper with the following headline: “Oyenusi smiles to his death.” Below the photograph a smaller sized description: “Trussed up but still smiling. Oyenusi at the stake yesterday.” The execution took place on a Lagos beach, with a live audience estimated at thirty thousand.

At the outset the reporters describe a paradox. Here’s a man destined to die pictured smiling: “Tears and jeers followed the execution of the master armed robber, Ishola Oyenusi, and his comrades in crime at the Lagos Bar Beach yesterday. The tears flowed from a few friends and relations and those who could not stand the sight of blood. The vast majority of viewers, however, booed in derision, apparently content that a major victory had been won for peace, law and order. But the principal actor in yesterday’s Bar Beach show, notorious ‘doctor’ Ishola Oyenusi kept smiling – even on to his death.”

The highest point of a condemned man’s life—his execution—points backwards, to the activities that damned him. I am told that Oyenusi and six other men were condemned for robbing a factory in Ikeja, Lagos of 28,000 pounds, killing a police constable in the process. I am told of his first robbery, when he snatched a car for his stranded girlfriend—“he was quite gentlemanly and chivalrous,” legend says—killing the owner in the process. I am told of his arrogance: In 1970 he shot a policeman who attempted to arrest him, and said, “People like you don’t talk to me like that when I am armed. I gun them down.”

To the crowd that “booed in derision, apparently content that a major victory had been won for peace, law and order,” he offers a smile, as if to deride their derision. A double negative. The smile of a condemned man cancels the derisive boos of the crowd at his execution. How could he have looked upon death remarkably unfazed?

His final appearance is incommensurate with my expectations. For me, an onlooker today, he has not become the “good thief,” contrite in the face of death, the thief who asks to be remembered in heaven. I encounter an inconsistency in matching the horror of his deeds with the ludicrousness of his smiling face. Two unparalleled desires coincide: the desire to mete justice on a notorious armed robber and his gang, and the desire of the notorious armed robber to exit the stage with elation, spectacle, and fulfillment.

But this is only because I consider Oyenusi’s photograph. Not, for instance, the video of his execution. The mystery of photographs is that, while they seem to present irrefutable appearances, the suddenness with which a picture is taken merely hints at the totality of a moment. His smile might have prefigured an inconsolable wail, and his inconsolable wail a harrowing dying declaration. Regardless I consider a photograph in which he smiles while trussed, facing a fourteen-man firing squad. 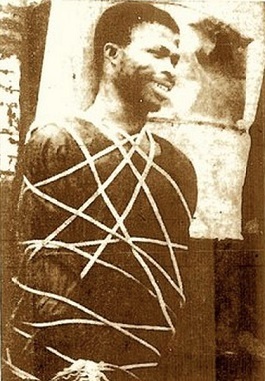 Today you and I observe this image mostly on a screen. It is likely that after the front page of the newspaper was scanned, the photograph was cropped. Now it is shared as a somewhat blurry sepia photograph. On that technical level, the photograph of Oyenusi’s smile is illumined by how far I can zoom in. Do details blur in an attempt to bring his face closer? Are peculiarities of his face indeterminate when the image is transferred across digital devices? I am uncertain about a response to Oyenusi’s life based entirely on an image of this sort. Considered in this manner my speculations pivots easily towards the mysterious, half-assured sophisms.

What is the promise of a paradoxical photograph? What man smiles on his execution day? Not the smile of a martyr, who glimpses paradise. I am only barely informed of those who mourned him—“The tears flowed from a few friends and relations and those who could not stand the sight of blood.” His narrative is entirely framed within the milieu of crime. There is no respect he deserves, I am told, no humanity except punishment, no qualifying word but “notorious,” and therefore no counter-narrative.

A recent recount of his notoriety by the Nigerian website Pulse.ng in December 2015—“Profiling Nigeria’s Notorious Armed Robbers: (‘Doctor’ Ishola Oyenusi)”—explain his smile as follows: “Before he was executed on Wednesday, September 8, 1971, at the famous Bar Beach show in front of 30,000 watching Nigerians, no one believed that ‘The Doctor’ would be captured, as he was famed for ‘disappearing’ or his body capable of being pierced by bullets. In fact, he must have had so much faith in his charms that he smiled all the way to the stake and even as soldiers aimed their rifles at him and his co-criminals, Oyenusi still radiated an aura of invincibility.”

What this suggests, in its sure-footed rhetoric, is a consolatory sentiment also clichéd. You are uncertain of what to make of a society where a man as feared as Oyenusi thrives. You exaggerate his monstrosities, ennoble him with an “aura of invincibility,” and mystify his power over you. Think about the long list of Nigerian criminals characterized as possessing charms. Think about the assortment of diabolical items on display when robbers are paraded shirtless by the police. Considered in this light, Oyenusi’s smile is a taunt. Like Adolf Eichmann in a Jerusalem court, his smile is declarative: “I am not the monster I am made out to be,” “I am a little leaf in the whirlwind of history.” If you push these declarations to their farthest limit, you encounter the same vicious paradox.

“Trussed up but still smiling.”

How may this photograph cease to be one portraying an armed robber?

Even Oyenusi, at the final moment, consoled himself with clichés. He is reported to have screamed, “I am dying for the offense I have committed.” Whether he believed this or not isn’t relevant to anyone but him, for sometimes we peddle clichés to arrive at individual convictions. For those who outlived him, whose attention is repeatedly drawn to his contrariety, the most promising entry to his story is what’s uncertain, likely unknowable, about his demeanor.

Dying as theatre. Everyone has, for the fraction of a moment, considered the instant of death. To die surrounded by those we love, on a bed. To die watched by those who consider us enemies, on a stake. To die by accident, our bodies trammeled by crushed metal. However impertinent some of these possibilities are, dying presents itself as a performance. We have been cast as principal actors. This is a way of looking at Oyenusi’s smile.

Let us speculate for a moment on the sort of viewers gratified by the shooting of condemned men. Oyenusi’s execution was preceded, months earlier, by other firing squads. On August 24, 1970, three men, former Biafran soldiers, were publicly executed for armed robbery. On March 25, 1971, two armed robbers were also publicly executed. Videos from the AP Archives document the executions. The men are dragged, hooded, tied, prayed for; martial music is played to the marching strides of army officers. The sentence is read, then a line of kneeling soldiers intermittently open fire. Earlier, the camera’s panning movement captures the surrounding crowd. There are those who climb on trucks to see better, who crouch in front, who stand behind. People clamber to find vantage spots. As soon as rifles are trained at the villains, there is anticipatory silence.

Oyenusi’s smile cannot escape the public he faces to whom it is likely addressed.

Our relationship with the paradox his photograph presents is bound with our interest in violent, public justice.

An execution is public if it invites viewers to watch justice unfold. In this sense the viewers are allied with the executioner, chastising the executed, surviving him. The prevailing proposition is that, upon the death of a dangerous armed robber, the world is less dangerous. Yet it is possible to think of a larger climate of fear that survives the feared.

When we look back at Nigeria in the early 1970s, barely emerging from the chaos of a War, led by a military government, we consider a milieu in which a violent response to crime and dissidence was consensual. Ishola Oyenusi’s execution is the synecdochical flashpoint of that milieu.

A public display of justice does not necessarily resolve a larger climate of fear. We understand that a crime is committed against the community whose law is violated, not merely the individual victim. We also permit the state’s use of violence to ensure that the framework of its existence—law and order—is not threatened. But here’s a dilemma: how do we separate such acts of state as capital punishment from the bureaucracy that makes it impossible and unachievable to ensure the safety of “innocent” Nigerian lives? That many of us stand adjudged and disposable—“suffering and smiling,” looking and laughing, matching misery with mirth—is one lesson from Oyenusi’s demeanor. If this comparison seems defective, I ask you to return to the banality of Oyenusi’s execution, right there on his smiling face.

For LJB Hannah Arendt differentiates between thinking and violence: "a gulf separates the essentially peaceful activities of thinking or laboring…

This Image of Bi Kidude